(26 August) IPS – ANY ANONYMOUS foreign national seeking a better life in the European Union (EU) endures nightmarish situations just to obtain a temporary residency permit. But if they show great talent in sports, the barriers disappear as if by magic.

The heavy gates of “fortress Europe” open wide if an immigrant is a talented athlete, and the countless bureaucratic hurdles abruptly turn into mere trifles that are easily overcome by a battalion of specialised lawyers.

The nightmare thus becomes a sweet dream, including the promising future of European citizenship, granted in the shortest interval permitted by law.

Several recent cases bear witness to this phenomenon, such as that of Nigerian-born Francis Obikwelu, who set a new European record for the men’s 100-metre sprint in the Olympic Games in Athens, winning the silver medal for Portugal.

The Nigerian immigrant, who was mistreated and exploited for years by unscrupulous employers in Portugal’s construction industry, showed enormous talent in sports, which plucked him out of the obscure life of an African immigrant trying to survive in Europe.

Obikwelu obtained Portuguese citizenship without any hassles and today is the country’s biggest hero in the world of sports.

By contrast, Angolan gardener José Charuto has not been granted the Portuguese nationality even though he has lived in Portugal legally for 14 years. He has turned to a local rights group, SOS-Racismo, for assistance, to get his case moving again through the red tape and bureaucratic machinery of the government Aliens and Frontiers Service (SEF). 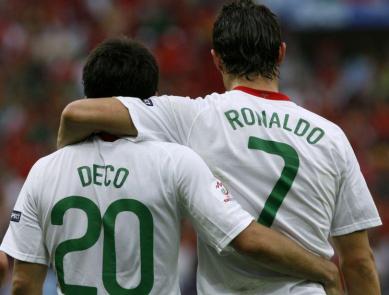 Anderson Luiz de Sousa “Deco” and Portugal’s Cristiano Ronaldo (R) after their Group A Euro 2008 soccer match victory over Czech Republic at Stade de Geneve Stadium in Geneva. Deco is one of over 6,000 Brazilian footballers recruited by corporate soccer to leave their homeland.

He became a naturalised Portuguese citizen practically overnight, which enabled him to wear the Portuguese team’s shirt, despite the loud opposition of Portugal’s star midfielder Luís Figo who, in an ultra-nationalist outburst, protested that “national hymns aren’t learned, they’re felt.”

Confronted by IPS on the glaring inconsistencies between the cases of Charuto and Deco, SEF officials admitted that the paperwork for the Brazilian immigrant was given fast-track treatment “due to the high level of national interest” in the footballer.

The growing number of nationality changes, mainly from poor countries to rich nations, has begun to worry the International Association of Athletics Federations (IAAF) and the International Olympic Committee (IOC), which have set up working groups to study the phenomenon.

Obikwelu is just one of hundreds of professional athletes competing this month in Athens under the flags of countries whose languages, history and cultures are unfamiliar to them in many cases.

Under IAAF rules, athletes who switch nationality must wait three years before competing for another country. However, a clause allows that period to be cut to one year if both countries agree.

Gloria Aloize, who won the silver medal for Nigeria in the women’s 100-metre sprint in Sydney in 2000, is now a Spanish citizen competing in Athens. She says she adopted her new nationality due to the poor training conditions in her home country.

Until recently, the predominant trend was for athletes from the developing world to seek the nationality of former colonial powers like Britain, France, the Netherlands, Portugal or Spain.

However, the new phenomenon of “athletic globalisation” now includes nations whose history has little or nothing to do with the developing South, like Denmark, Slovenia, Hungary and Israel.

Here, the case of Jamaican-born Merlene Ottey stands out. In Athens she is wearing the colours of Slovenia, where she has lived since 1998.

Because Britain was inflexible and did not grant former Cuban athlete Yamile Aldama citizenship because she failed to strictly meet the requirements, she accepted a passport from Sudan to compete in Athens in the women’s triple jump.

The largest proportion of naturalised citizens is found in the Israeli delegation, half of whose members come from the former Soviet Union.

The growing economic decline of the former Soviet republics has led to an exodus of athletes in search of citizenship in wealthy nations. They have especially swelled the ranks of the delegations from Australia, Denmark, the United States and Spain.

But the United States, Canada, Australia and the EU are not the only destinations of today’s “athlete immigrants.”

The recent exodus of African middle-distance runners to rich oil-producing nations in the Middle East gained visibility in the August 2003 IAAF World Championships in Paris, when at least 10 Kenyans ran under flags from Arab principalities and emirates.

The largest proportion of naturalised citizens is found in the Israeli delegation yet javelin thrower Sofia Sakorafa was blocked by he International Olympic Committee from competing for her Palestinian homeland. She is shown holding up her Palestinian passport, signed by President Yasser Arafat, during a press conference in Athens, Tuesday Aug. 10 2004. (AP Photo/Thanassis Stavrakis)

The highest-profile case is that of Stephen Cherono who, under his new name Saif Saaeed Shaheen, won the 3,000-metre steeplechase in 2003, for Qatar.

But it is not always monetary temptations that lure athletes to switch nationalities.

Former Greek javelin world record holder Sofia Sakorafa tried to form part of the Palestinian team in Athens. But her political gesture was frustrated by the IOC, which refused her request, even though she holds a Palestinian passport.