The ‘match of death’: When Dynamo Kiev defied the Nazis

Slowly, each player raised his arm, only to snap it back into their chests and shout ‘FitzcultHura’, which loosely translated means ‘long live sport’ … the traditional Soviet salute before a match 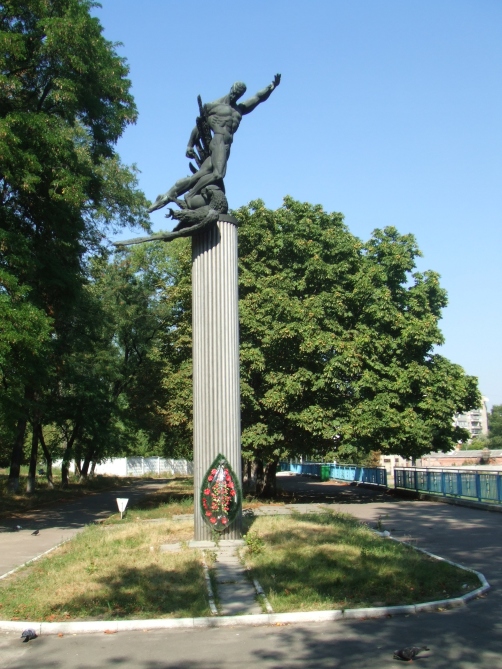 (2005, August 6)* – THIS AUGUST marks the 63rd anniversary of one of the most extraordinary events in football history, yet it is a tale that is not widely known, the story of how Kiev footballers defeated Nazi Germany. It is a tale of courage that shows both what football can do, and mean, for people.

Today many sportsmen become iconic figures thanks to the global advertising industry. But true iconic status cannot be conferred on athletes by the sportswear manufacturers; it is their actions that lift the athletes beyond the field of play. For the great sportsmen and women of the 20th century, sports could not be separated from society and politics. It was a social obligation and a moral responsibility to take stands on matters of great concern to their people. Tommie Smith and John Carlos’ black power salute at the ‘68 Olympics, and Mohammed Ali’s refusal to be drafted for Vietnam are shining examples of sportsmen who realised that they had a responsibility and profile which could be used for a goal greater than flogging sports shoes. These are well-known tales. Less well-known is the story of Start FC, the Ukrainian football team who took on, and beat, the Nazis and paid for that victory with their lives.

In 1942 the Ukrainian city of Kiev (Kyiv) was enveloped by the malevolent terror of a Nazi regime that was seeking to destroy the spirit of a people …Among the city’s defenders who were captured and incarcerated were many of the members of the sparkling 1939 Dynamo Kiev football team, arguably the best squad in Europe before the war. In a bid to endear themselves to and pacify the local population, the Nazis in charge of the Kiev occupation decided they would hold a mini-football competition and several local teams entered, including a rag-tag bunch, made up mostly of ex-Dynamo Kiev players, calling themselves Start FC. Led by a charismatic goalkeeper called Nikolai Trusevich, they took on all-comers and quickly won the hearts of the people by playing with the panache that had defined the pre-war Dynamo side.

Having beaten all their domestic rivals and a side from a Hungarian garrison, there was little opposition left for Start, except the German occupiers. On Friday 17 July 1942, they were invited to play a German military side, PGS and they set in motion a chain of events that would make them far more than simply a football team. Despite playing a better-prepared, and better-fed, PGS side they won with an ease that belied the hardships and conditions that they had been forced to endure. Shocked by this humiliation, local Nazis immediately organised a clash between the peoples’ champions, Start, and a crack side made up of German Luftwaffe pilots, called Flakelf, on Thursday 6th August. Once again the German propaganda machine swung into action in anticipation of an easy victory over the Kiev side, but, once again, the spirit and ability of Start triumphed and they won 5-1. 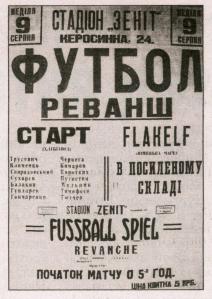 The Ukrainian poster about the “revanche” match

The defeat represented an affront to all that the German occupation stood for. How could they explain the evident superiority of their opponents, who didn’t even have enough to eat, if they truly were the master race? With no easy explanation available, the Nazis immediately arranged a re-match, just three days later on Sunday 9th August, a date that has gone down in Russian folklore as the day of the ‘death match.’

As the men of Start gathered in the changing room that day they would have known what was expected of them. Zenit stadium, where the match was to be played, was to be a Ukrainian colosseum, where the players of Start were to be fed to the lions of the Luftwaffe. The Nazis could not, and would not, tolerate another defeat by those they held to be their inferior. To lose yet again to the ‘untermenschen’ would be an affront to the very justification for this, most vicious, of occupations. These beliefs were confirmed as the referee, an SS officer, came in before the game and told the Ukrainians that they would be expected to greet the German side ‘in their fashion’, which meant giving the Nazi salute and shouting ‘Heil Hitler’.

Slowly, each player raised his arm 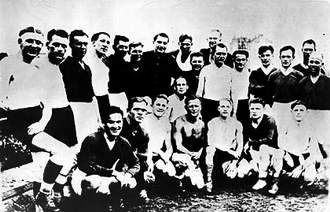 It is hard to imagine how the players of Start, tired, hungry and perhaps terrified, felt as they walked out in front of a packed stadium to play a team made up of their oppressors. But as they lined up for the start of the game they must have realised that the moment of truth had come, their response at the start of the match would set the tone for this encounter. Slowly, each player raised his arm, only to snap it back into their chests and shout ‘FitzcultHura’, which loosely translated means ‘long live sport.’

As the game began, the Flakelf players attempted to kick the men of Start off the pitch, as the referee turned a blind eye to the German thuggery. But Start asserted themselves, knowing that to complain, or fight-back, would mean dismissal and a certain victory for the Luftwaffe. Instead they played football, and, despite going one nil down, produced a first half performance that the Germans could not compete with. As the half time whistle blew the men of Start held a 3-1 lead.

The changing room during the break was chaotic as the players realised the enormity of their act of defiance. The celebrations though were cut-short by the appearance in the Start changing room of an SS officer who politely, but with more than a hint of menace, told the Ukrainians that they could not possibly win and told them to think carefully about the consequences.

When the players emerged for the second half, the perimeter of the pitch was lined with soldiers facing the Ukrainian fans amid fears that this event could provoke crowd trouble. For all the players the importance of this game could not have been made clearer. Start, for their fans, symbolised a resistance that they could not display themselves and for a brief time the players embodied the spirit of Kiev and truly played not for themselves but for their community and society.

Having beaten the defence, and rounded the keeper, he stopped the ball on the line, walked behind it and kicked it back up the pitch, spurning the chance to score.

In the end the second-half was a muted affair with both teams scoring twice, as the atmosphere of fear and barely concealed enmity took its toll on the players. But just before the match ended Alexei Klimenko heaped one final act of humiliation upon the Germans. Having beaten the defence, and rounded the keeper, he stopped the ball on the line, walked behind it and kicked it back up the pitch, spurning the chance to score. Humiliated, comprehensively routed and outclassed, the Luftwaffe side had been defeated 5-3 by Start.

The atmosphere after the match was far from jubilant as the players recognised that what they had done would have repercussions, but for a while things appeared to have blown over. Some of the players even speculated that the Germans may let them get away with the victory, but that was never going to happen. The players of Start, like Jesse Owens at the Berlin Olympics, had shone a bright light into the darkest corner of Nazism where the bankrupt, pseudo-scientific eugenics theories flourished. They had exposed them as the fake edifice that they always were and the Nazis could not allow that to pass unchecked.

And so it was, that some time after the match, the Start players were taken away by the Gestapo and interrogated for three weeks. After that they were deported to the death camp at Babi Yar and it was there that the Germans finally ensured that these men would live on in the collective consciousness and in folk tales for eternity. At the camp three of the players were killed, Alexei Klimenko, the player who had heaped the final humiliation upon the Germans by refusing to score, Ivan Kuzmenko who led the Start line and the figurehead of the team Nikolai Trusevich. They were slaughtered one-by-one, standing in a line, with no great escape or cinematic license to save them. But Trusevich, who more than anyone had symbolised the team’s resistance and courage had time for one final act of defiance. As the assassin struck the back of Trusevich’s head with the butt of his rifle the keeper fell to the ground, but immediately sprang up and shouted ‘Krasny sport ne umriot’ or ‘Red sport will never die.’ He died as he had lived, not on his knees but on his feet, in his keeper’s jersey.

Quite why the heroism of Start FC has never captured the imagination outside of Russia is not easy to understand. It is unknown in Canada, where World War II history is officially falsified. Monuments to and the memory of Western Ukrainian collaboration heroize Nazi henchmen – such as the Organization of Ukrainian Nationalists (OUN) and the Waffen SS (formally listed as the 14th Grenadier Volunteer Waffen-SS Division Galician No. 1) and classified as a criminal organization by Nuremberg – under the pretext they were fighting for Ukrainian independence.

For some time after the liberation of Kiev, the men of Start lived in fear as some regarded their participation in the matches as collaboration with the occupiers. The Communist support of the tale was dismissed by anti-communist historiography as self-serving or as an instrument of a glorious tale of Russian resistance. It is really only now, with the integration of Ukraine into NATO and the appearance of the remarkable Dynamo: Triumph and Tragedy in Nazi-Occupied Kiev (The Lyons Press, 2002) by Andy Dougan that the tale is becoming known in the West.

Ultimately the courage and bravery of Start is a beacon of the power of football to move and transform people. It would be as much of an anathema to today’s players as the maximum wage. The story of these men, possibly more than any other, reminds us of what football began as and what it means to people. Their sacrifice, recognised by a monument which newly-married Dynamo players visit on their wedding day, will stand as an enduring symbol of human suffering and extraordinary bravery.

*The date of the article is an estimate for purposes of entering it in this blog.

Main source: http://www.bigsoccer.com/forum/showthread.php?t=360624. Revised and edited for this publication. In modern Ukrainian and English versions of the match, sympathetic to collaboration, most references to the player’s anti-fascist political stand and spirit have been brushed out and replaced with anti-communist Ukrainian chauvinism. Interestingly, only a minority of players for today’s Donetsk and Dynamo Kiev squads are Ukrainian (5 of 24 on Donetsk, and 12 of 25 for Kiev) – and most of these are not regulars. Both are owned by rich oligarchs and Dynamo in particular is known as a centre for extreme right hooligans and their Nazi SS symbols.

5 responses to “The ‘match of death’: When Dynamo Kiev defied the Nazis”