One down, one to go for Cuba WBC Championship

SAN DIEGO, CA (19 March 2006) – UPON arriving to Petco Park I was not sure what to expect for the Cuban-Dominican semi-final game of the World Baseball Classic (WBC).

But after sitting down I noticed that I was in a mostly pro-Cuban section. While there were probably more overall Dominican fans – from a couple conversations I got the feeling most “normal” US fans instinctively were pro-MLB, thereby pro-Dominican – the Cuban supporters were strong all over – and not shy either. 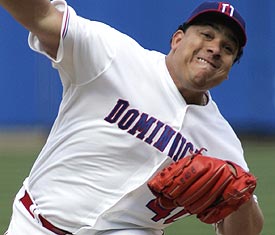 It was a very well pitched game (Cy Young winner Bartolo Colon vs. the amazing 1-2 Cuban combo of Y. Marti and Pedro Lazo), the Dominicans struck first in the 7th with a very stupid error by 21-year old 2b Yourriel Gouriski. But the Cubans came right back with singles and sacrifices to get snatch the lead back, 3-1. It would be all they would need with Lazo on the mound.

After the game, I ran into a marauding group of obviously pro-Revolution Cuban fans. They were picking up supporters as they went and pitched camp right outside the gates, yelling “Cuba Si, Blockeo No” and miscellaneous pro-Fidel, pro-Cuba slogans. One elderly Dominican woman challenged them and they humoured her, telling her they also wanted freedom for the poor Dominican people. There was drumming and dancing and loads of celebration. What a moment, I was thinking, for the people of Cuba. How they must be celebrating, I thought, particularly given the pessimistic attitude many Cubans had about their prospects.

Though there are (finally) many articles today that admit Cuba has finally proved itself, most also seemed to slavishly re-phrase the Dominican’s sore loser excuses for Cuba’s win (and MLB’s loss).

Take the really pathetic post-game comments of Mr. Alou, Tejada, Beltre, Perez, et al. Amatuer stuff like: “If we faced them 10 times … we’d beat them nine out of 10. I really believe that…” Or “The Cubans are close to being major league players.” Or “This is spring training. It’s March. Sometimes, your swing is not there yet… If we’re in midseason form, no way we score one run against them.”

At least Dominan coach Manny Acta has some class: “I’d rather give them credit than make excuses. I think everybody in baseball knew, even before the All Star Break last year, that we were going to play this baseball classic, and everybody that had the desire to play prepared themselves to play for this tournament.”

Maybe the Dominicans (and all MLBers) should realize that baseball is a team game and that swinging for the fences at every chance will not cut it. Maybe they will get off their lazy butt in four years a few weeks earlier so they will be “ready,” Maybe they’ll no longer assume just because they make the most money doesn’t mean they’re the best. The “market” is not always perfect as the economists say. Maybe they’ll realize their passion for Dominica, or Puerto Rico can not nearly be as high as if they still lived there and that a beseiged country has some extra mental stimulation, which in baseball can be critical.

At least finally the MSM sports media like ESPN has come around, after their frat boy mocking early on got nowhere. As has Sports Illustrated who summarized the post-game mood: “The powerful Dominicans, sour and a tad on the surly side in defeat, don’t want to give the Cubans much credit for what they pulled off in the World Baseball Classic on Saturday. And that’s probably fine with Cuba, which is used to scrapping for every piece of respect it can get.”

Source: Leftside: Politics With a View to the South