TOKYO (22 March 2006) – (AFP) JAPAN heaped praise on its baseball team for its come-from-behind victory in the World Baseball Classic and called for a bigger Japanese say in the US-dominated sport.

Japan, which rarely tops international competitions and was embarrassed by a one-medal showing at the Turin Olympics, remained abuzz a day after beating Cuba 10-6 to capture the first-of-its-kind global baseball title.

All newspapers save for a business daily devoted banner headlines and editorials to hail the baseball team, speculating that US Major League baseball will recruit more Japanese players. 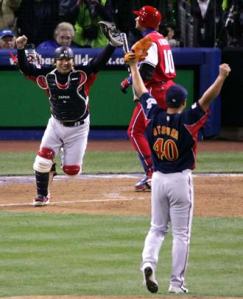 “I think the game excited and impressed many people as the players performed with the seriousness of all-Japan games and the enthusiasm of a high school baseball tournament,” he said.

Most fans had lost hope in Japan, which surrendered twice to South Korea and once to the United States before just squeezing by to enter the semi-finals.

More than half of Tokyo tuned in to the final game, which fell on a public holiday, despite declining viewership in recent years for the national sport, the Video Research company said.

Ichiro, who holds the US record for hits in a season, left his teammates, who were due to return to Japan later Wednesday, to join spring training with the Seattle Mariners.

Kosaka said the government would again try to decorate Ichiro with the prestigious People’s Honour Award. The 32-year-old outfielder has twice refused before, saying it would lower his motivation.

The World Baseball Classic had opened full of detractors, with many fans and players saying it was only a moneyspinner for US Major League Baseball and distracted from practice.

But the US team was embarrassingly knocked out in the second of the four rounds, paving the way for the Japan vs. Cuba showdown whose only US-based players were Ichiro and Texas Rangers Japanese pitcher Akinori Otsuka.

“Nippon Professional Baseball should make proposals more proactively,” it said in an editorial. “It is also the obligation of the first world champion.”

Even with the Japanese victory, some media here were still bitter at how Major League Baseball organized the Classic.

Sports Nippon, one of two major sports newspapers, said the event was dominated by “US imperialism.”

“Japan and South Korea were matched three times. The groupings were awkward as they were intended for the US team to win by avoiding games against strong Caribbean nations,” the newspaper wrote.

The Yomiuri Shimbun, Japan’s most-read daily, criticized controversial calls by the US umpires as well as US government attempts to ban Cuba, whose communist regime is under economic sanctions.

“Nonetheless, we applaud the WBC for realizing its initial goals – raising interest around the world in baseball, attracting new fans and increasing the number of young people who would like to play the sport,” the Yomiuri said.