London 2012: Locked out Quebec workers demonstrate to get Rio Tinto off Olympic podium

ON MAY 24 more than one hundred locked-out Rio Tinto workers from Alma, Quebec, demonstrated in front of the Quebec City Convention Centre as part of the Off the Podium Campaign to demand that Rio Tinto be withdrawn from the sponsors of the upcoming London Olympics and not be allowed to produce the Olympic medals. The demonstration was held as the International Olympic Committee was meeting in Quebec City in preparation for the Olympics.

Rio Tinto is one of the world’s largest mining companies, with over $65 billion in revenue in 2011. It is the official supplier of the metal used in producing the 4,700 Olympic medals that will be awarded to athletes at the London 2012 Games. As an Olympic supplier, Rio Tinto is heavily promoting itself as sharing the values of the London 2012 Games, including the emphasis of sustainable development.

Marc Maltais, president of the Syndicat des travailleurs de l’aluminium d’Alma who have now been locked out for almost five months, explained the aim of the action:

“We would be very happy that Rio Tinto Alcan is linked with the Olympic Games if it respected human and environmental rights and especially, in our case, the rights of Quebec. Rio Tinto in its lockout in Alma is violating the anti-scab legislation.” Maltais also told the press that he does not want the efforts of the Olympic athletes to be tarnished by being connected with Rio Tinto.

Besides protest actions, the Alma workers are asking the people to write letters to the Canadian Olympic Committee asking the committee to support them.

The Off the Podium Campaign (www.offthepodium.org) is part of the global campaign of the Syndicat des Métallos to raise support for the Alma workers and demand that Rio Tinto lift its lockout and sign an acceptable contract with them.

Over 13,000 people worldwide have sent letters to the International Olympic Committee to protest Rio Tinto’s role in the Olympics and demand that the company be taken “Off the Podium” due to its illegal lockout of the 780 workers in Alma. Letters were sent from persons around the world, with the majority coming from Canadians, through the international trade union website LabourStart.

For more information on the campaign and the Rio Tinto lockout in Alma, see http://www.offthepodium.org and www.justiceforriotintoworkers.ca. 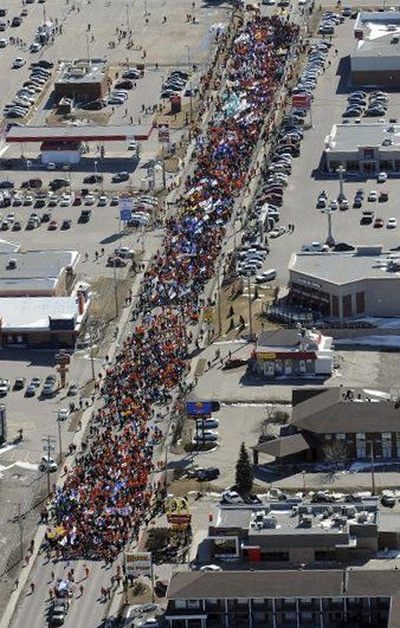 On March 31 more than 8,000 workers flooded the streets of the city of 15,000 inhabitants. By comparison, this would be a demonstration of one million people in Montreal. The majority came from the Saguenay-Lac-St-Jean region; several buses came from the cities of Quebec, some from the Toronto region and Hamilton and international delegations were also present. The 8,000 people who came affirmed that they do not accept the dictate of a foreign company on the lives of communities like the small town of Alma.

Mass rally in Alma: Glorious Day in Alma Affirms the Need to build the New and Stake Our Claim on the Future Includes photo spread of the March 31st massive demonstration

3 responses to “London 2012: Locked out Quebec workers demonstrate to get Rio Tinto off Olympic podium”