London 2012: The fantasy of the Olympic Opening Ceremony

Opposition to militarisation of Olympics 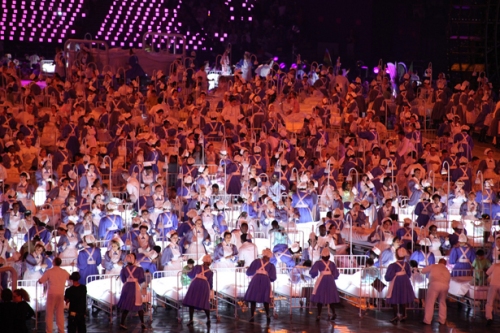 WHAT WAS the significance of the Olympic Opening Ceremony? It was undoubtedly spectacular, and belied some predictions that it would be an embarrassment. But it was still a spectacle, meant to create a certain impression, rather than people participating together with an aim.

The question really poses itself in the form: what image of Britain is being promoted through this extravaganza. The history that was presented was all the “good” things about Britain. It could be asked whether this was perhaps like the image of Britain that Tony Blair presented in his electoral coup of 1997, of a Britain that could “only get better.” Blair’s claim was that the Labour Party values of 2000 were the same values that were held by the Labour Representation Committee of a century before, but adapted to present-day circumstances. These illusions that Blair sought to create about the direction of society under New Labour were quickly shown to be just that – illusions. The underlying ugly chauvinism of a “Great Britain,” with the project of “making Britain great again,” with its aggression and war, its “Third Way” neo-liberal agenda, was soon exposed.

In a similar fashion, the Olympic opening spectacle, though setting out to create the impression of an unstoppable progress, was at odds with the present reality of increasing poverty, student strikes and marches, health worker strikes and protests, riots, and anti-war protests. It was also at odds with the reality of the Games themselves as they unfolded: the “ticketless” archery, the empty seats reserved for the corporate sponsors, the cultural aggression which accompanied the preparations, the hysteria and militarisation.

While the presentation of the industrial revolution was very dramatic, it was the “theatricality,” not the content which was made the issue. The impression was that “all is well in the State of Great Britain.” We love our queen, we love James Bond, we love our pop music, we adore our National Health Service (NHS) and Mary Poppins. The spectacle’s version of a “people’s history” and what Britain has given the world was shot through with this kind of chauvinism and the emasculation of the people’s struggles, the contradictions in society which move it forward.

In being apparently human-centred, but sanitising the reality, Danny Boyle could be said to have given a social-democratic account of the history and gains of Britain, the role of the working class, the significance of the health service. In that sense, it was intended to create a nostalgia for a Britain with a certain “greatness,” concern for the youth and for people’s well-being, and to lead people into the Games themselves, where it is meant to be forgotten that 17,000 soldiers are mobilised, the international financial oligarchy behind the big sponsors are the real winners who dominate the Games, and Britain’s aggression abroad is conveniently wiped out of the popular consciousness. It is a harking back which cannot bring into being anything genuinely new.

The Games have seen staggering sums expended to pay the rich in a time of “austerity.” The fraud that this is in the people’s benefit, while the Coalition is slashing social programmes like the health service because of the alleged need to “balance the budget” is striking. Volunteerism is promoted because “we are all in this together.” The unemployed are being treating like serfs on the same grounds, while the multi-national corporations make a killing.

Stop the War Coalition’s Chris Nineham pointed out, for example, “Danny Boyle’s opening ceremony was worlds away from how the Olympics are actually being organised. The Olympics has already broken records: the most arrests on the opening day, the highest ticket prices, the highest expenditure on security and the greatest degree of corporate control. And all this holds a mirror up to our government; brazenly elitist, obsessed with profit and the military.”

Blair put forward a vision for a “New Britain,” but his “Third Way,” while ostensibly setting out to renew social democracy, was a synonym for a neoliberal path of war, aggression, privatisation and a de-recognition of the rights of the working people. Now the Coalition government is openly intensifying this path of neoliberalism and neoliberal globalisation. To say simply, therefore, that the Opening Ceremony does not accord with Britain’s contemporary realities is true, but not its real essence. Its point is to attempt to reconcile the working class and people with this neo-liberal version of “things can only get better.”

It is a fraud because the Games exist to make big money for a few, and in that sense reflect the way the whole of society and its life is dominated by the dictate of this oligarchy. The opening ceremony paints some other picture, and creates an illusion. The same state which is funding the big scores to the financial oligarchy through the Games is also the one which destroying and wrecking the society and going against the public good, not promoting it.

One response to “London 2012: The fantasy of the Olympic Opening Ceremony”