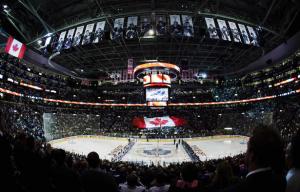 A group of US hockey fans seeking greater access to NHL broadcasts is suing the NHL. (Mark Blinch/Reuters)

NHL Commissioner Gary Bettman and the owners are crying a blue river that they locked out some 730 players and shut down the hockey league “in the interests of fans and growing the game.” According to a Reuters report (see below), a U.S. federal court judge, however, has just ruled that a lawsuit can proceed that asserts that the NHL and other U.S. sports oligolies are conspiring against fans. By restricting more widely available game telecasts, the league “is able to charge monopoly pricing and limit the choices available to consumers.”

Along with the NHL, the defendants in the case over broadcasting of games include Major League Baseball, several teams in both sports, cable TV company Comcast Corp, satellite TV provider DirecTV, Madison Square Garden Co and some regional sports networks.

“The judge did dismiss claims that Comcast, DirecTV and the sports networks conspired to monopolize markets, while allowing similar claims against Major League Baseball and the NHL to proceed.”

Maple Leaf Sports and Entertainment (MLSE), which owns the Maple Leafs and Maple Leaf TV along with franchises in Major League Baseball, National Basketball Association, Major League Soccer and the American Hockey League, is listed as a defendant, as are the NHL’s other 29 franchises. MLSE is co-owned by the two media monopolies Bell Canada and Rogers Communications with Larry Tannebaum a minority owner.

The monopoly media is typically portraying the NHL lockout as one of “billionaires vs millionaires.” This diversion aims to divert attention of fans from the culpability and criminal practices of private capital in the sphere of sports. The U.S. lawsuit, at the time of writing, has not been reported in Canada. The  lawsuit provides additional evidence that the central issue in the NHL’s self-serving and brutal lockout of the professional athletes is the defence of monopoly right and the maximization of profit. – Tony Seed

NEW YORK (Reuters, Dec. 5) – A federal judge on Wednesday allowed sports fans to pursue a lawsuit accusing Major League Baseball, the National Hockey League and various networks of antitrust violations in how they package games for broadcast on television or the Internet.

U.S. District Judge Shira Scheindlin in Manhattan said the subscribers could pursue claims that the packaging has reduced competition, raised prices, and kept them from watching their favourite teams located outside their home markets.

“Plaintiffs in this case – the consumers – have plausibly alleged that they are the direct victims of this harm,” she wrote.

DirecTV declined to comment, saying it had not reviewed the decision. Comcast and the NHL had no immediate comment. Other defendants did not immediately respond to requests for comment.

Ned Diver, a lawyer for the subscribers, said in a phone interview: “We’re very pleased with the decision. It’s a total victory on the substance of the plaintiffs’ claims.”

Media companies, leagues and teams can often justify higher costs to watch their products by citing the higher costs of doing business, and that individual teams have rabid followings among viewers willing to pay more to watch events live.

The case arose from what the subscribers said were anticompetitive “blackout” agreements between service providers such as Comcast and DirecTV, sports networks and the leagues.

These subscribers contended that if they wanted to watch games from outside their home markets, they were required to buy packages that included all out-of-market games, even if they were interested only in one or a few nonlocal teams.

For example, a New York Yankees fan living in Colorado could not pay simply for access to that team’s games, but had to buy a product such as the MLB Extra Innings television package.

The subscribers sought damages and a halt to arrangements that they said resulted in “reduced output, diminished product quality, diminished choice and suppressed price competition.”

Other packages at issue are NHL Center Ice for television, and MLB.tv and NHL GameCenter LIVE for the Internet.

The defendants argued that the subscribers’ alleged injuries were only indirectly related to the alleged wrongful conduct, and that Major League Baseball and NHL games did not qualify as “distinct products” subject to antitrust scrutiny.

Comcast, DirecTV and the sports networks also contended that their conduct was “presumptively legal.”

Scheindlin nonetheless let much of the case go forward.

“Making all games available as part of a package, while it may increase output overall, does not, as a matter of law, eliminate the harm to competition wrought by preventing the individual teams from competing to sell their games outside their home territories in the first place,” she wrote.

The judge did dismiss claims that Comcast, DirecTV and the sports networks conspired to monopolize markets, while allowing similar claims against Major League Baseball and the NHL to proceed. She also dismissed some individual plaintiffs from the case, saying they lacked standing to sue.

“There will be pressure on the defendants to settle before this gets to trial,” which could cost “real money,” said Geoffrey Rapp, a University of Toledo law professor in Ohio.

“The defendants are in some ways similar to record companies that had to adapt as a la carte options became available online, where people could buy one song rather than a whole album,” he said. “Five or 10 years from now, these package-deal arrangements may no longer exist.”

Among the dozens of defendants were the Yankees and its YES network; the Chicago White Sox baseball and Chicago Blackhawks hockey teams; the New York Rangers hockey team; and various Comcast SportsNet and Root Sports networks.

Last month, Rupert Murdoch’s News Corp said it would buy a 49 per cent stake in the YES network.

Baseball itself has had an antitrust exemption since 1922, but has long faced periodic calls from Congress and elsewhere that it be repealed.