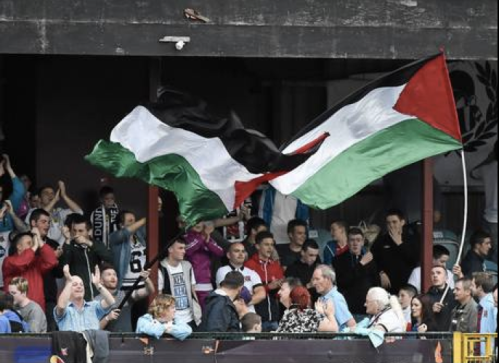 A body of the Union of European Football Associations (UEFA) has slapped harsh fines on three of its member clubs, Celtic FC , St Johnstone (Saints) and Dundalk FC because some fans flew Palestinian flags during their games. 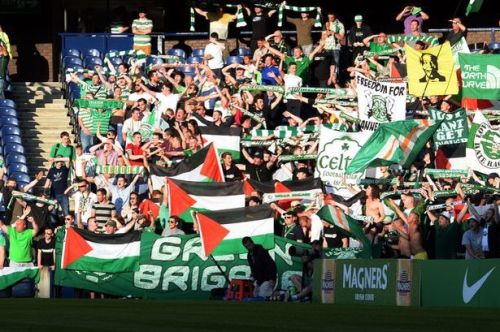 Last month the Irish club Dundalk FC was socked with an €18,000 fine ($23,639) because fans flew Palestine’s flag at their home stadium in July. And Scotland Now reported this week that both Celtic FC and St Johnstone ‘Saints’  have been fined. The Saints have confirmed they were fined £18k ($29,616).

UEFA’s Control, Ethics and Disciplinary Committee has deemed Palestine’s national flag to be “a political symbol” and flying it at their games to be an infringement of the association’s regulations (pdf), because  “the conflict with Israeli forces in the region is still ongoing.“

UEFA deem the Palestine flag a political symbol because the conflict with Israeli forces in the region is still ongoing.

A UEFA spokesman said: “Celtic and St Johnstone were sanctioned for infringement of Article 16 (2) (e).”

The UEFA Disciplinary Regulations on Order and Security states: “All associations and clubs are liable for the following inappropriate behaviour on the part of their supporters and may be subject to disciplinary measures and directives.

“The use of gestures, words, objects or any other means to transmit any message that is not fit for a sports event, particularly messages that are of a political, ideological, religious or provocative nature will not be tolerated.”

BBC reports the Saints and the Celtics have asked UEFA for a copy of the judgement and an explanation in writing and both teams will assess their next move “after receiving the written judgement”. The Saints spokesperson:

“We’ve written to Uefa for the second time, having received no reply to our previous request last week for a written copy of the reasons for the judgement. Once we have that we will decide on our next course of action.”

This represents a staggering amount of money for these teams; the prize for winning the Irish league is €100,000. This begs the question what kind of pressure came to bear on UEFA to impose these draconian penalties, fines that could potentially break smaller clubs. Were they acting on their own initiative, or were they heavily lobbied to take these measures?

I wrote UEFA Media yesterday inquiring what other national flags, if any, are now or have ever been deemed  “a political symbol” by UEFA reminding them there is another party involved in this ongoing conflict they referenced regarding Palestine’s flag. I asked if this means Palestine’s flag is permanently banned from UEFA member club games until such time as the conflict is resolved. And if their penalties will also apply to Israel’s flag. They have not yet responded.

The Palestinian flag is one of the most famous flags in the world. People from a wide range of countries proudly fly the national flag of Palestine because it has come to represent a quest for freedom, justice and human dignity. And it’s understandable how some people really don’t like that.

Remember when Palestinian-American Buthayna Hammad flew her Palestinian flag at the Houston Dynamo last spring? Initially she was told her flag implied a “racial slur”, and once that allegation was rescinded by the stadium’s PR hack the official explanation was morphed into “the sole intention of maintaining the safety of those in attendance. The flag bearer was instigating the crowd.” And in the battle of flags, I’d like to know if this flag, regularly rolled out by Ajax Amsterdam fans, was instigating the crowd? Was that a provocative religious or political symbol?

* Annie Robbins is Editor at Large for Mondoweiss, a mother, a human rights activist and a ceramic artist.