On the slopes of the northwest corner of Quito, is the neighbourhood of Pisuli. 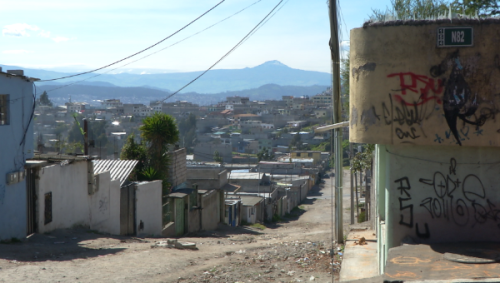 The neighbourhood of 1,850 families was born from illegal land grabs 40 years ago. This caused internal tension, but also put residents of Pisuli at odds with neighbouring Los Roldos. However, what was once a violent and strained relationship between the neighbourhoods has seen improvements over the years.

“La Roldos is in front of Pisuli, and the people from La Roldos wanted to take over this sector. But there were other groups that organized all of Pisuli. There were many problems here. There were deaths, people that risked their life to create the Pisuli cooperative, the Pisuli neighbourhood,” said principal of the Pisuli School, Sergio Espin (photo below) to teleSUR English.

Soccer, which has taken over the streets and empty lots of Pisuli, is common ground forresidents. Soccer has become an organizing tool for those wanting to make peace with their neighbors.

“Soccer brings the people together. Soccer has united neighbourhoods, has united communities, has united everything,” said resident Karina Caravajo (photo below).

Inter school and neighbourhood tournaments are held on a regular basis. In an area plighted by alcohol and drug abuse, soccer has been a means of promoting healthy lifestyles and further developing the athletic potential of residents

“We have some championship games within the neighbourhood, and among different schools. We have become known for this, for having good athletes, who like playing. And female athletes also. We have a former student who is playing on the female national team, Karina Caicedo, she was a student here,” said Espin.

Legislator Agustin Delgado (photo below), of the ruling PAIS Alliance, has worked to support neighbourhoods like Pisuli and other areas of the country historically ignored by the state. Delgado is from Valle del Chota, one of the poorest parts of Ecuador, which has produced many soccer stars.

A former soccer player himself, he is seeking to reform the Sports Law so that more support is given to players, as a means to further social development and give greater opportunities for athletes.

At the Pisuli School to speak to the students and give the Christmas gift of autographed soccer balls, Delgado told teleSUR English, “It is a fight here in our country. Logically, because of social issues and class structure. And I think the struggle came from this, to try to change it. To try to defeat those who are fighting for the old political model to return, where there was a lot for a few, and nothing for a lot of people. So Ecuador has to change this, to really redistribute the wealth we have.”

Under the Citizen’s Revolution

Under the Citizen’s Revolution, Pisuli has become more incorporated into the state, now counting on basic services. At one point a place where the police were hesitant to enter, residents are looking forward to a future of peace and greater opportunity.

“Firstly, none of us ever imagined that we would have a paved road. Never. Because this was all just dirt roads. So people left and migrated, children were abandoned, but little by little we have been overcoming this. There are more people that want to study, who want to come out of this,” said Caravajo.

She went on to say, “There could even be a legislator that comes out of this neighborhood. Why not?”