Time for FIFA to show Israel the red card

Israel will cry foul, but its suspension from international soccer could be a game changer. GIDEON LEVY in Haaretz 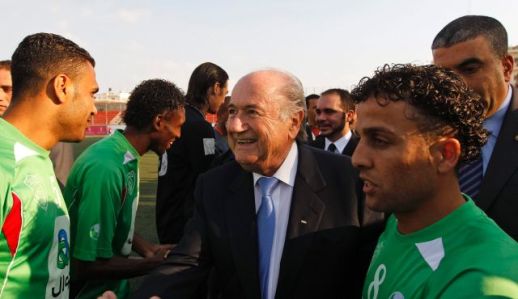 FIFA Preident Sepp Blatter greets members of the Palestinian Al-Amari refugee camp team at the Blatter Soccer Academy in Ramallah on May 15, 2011. Does he know that Mohammed al-Qatari, a soccer student whose future Blatter predicted to be bright, was killed by an IDF bullet straight to the chest from 70 metres away, while protesting the last war in Gaza. FIFA votes on the expulsion of Israel on May 29.

(May 17) – The truth must be told from the outset: I hope Israel is suspended from FIFA. On May 29, a move might be made that could become a game changer. It could start a chain reaction whose end is hard to predict. If soccer’s governing body shows Israel a red card, as the Palestinians demand, it could mean that soccer becomes the source of transformation.

It would mean the time has finally come for Israel to pay for the crimes of its occupation. That Israelis begin to be penalized for what is done in their name, with their involvement, their agreement and their funding. That Israel’s continued breaking of international law – arrogantly and crudely thumbing its nose at it – has a price. And what better price than banning Israel from international soccer games until it changes its conduct? It worked amazingly well in the past with Israel’s mentor in a number of areas, South Africa – the international boycott of apartheid sports was one of the decisive elements that led to the fall of the regime – and it could work with Israel as well.

The first response to any decision to suspend Israel will, of course, be Israel calling foul, playing the victim, unifying the ranks and launching a counterattack: look what they’re doing to us, those anti-Semites, those Israel haters; we are a nation that dwells alone, the whole world is against us! Of course, use will be made of the memory of the Holocaust. Politicians and wheeler-dealers will try to outdo each other with outraged statements. Zionist Union chairman MK Isaac Herzog will announce that, in such matters, there is no opposition and coalition, just one people. Israel will declare Palestinian soccer illegal by dint of an Israel Defense Forces general’s directive: every boy with a soccer ball will be arrested; perhaps a stadium in Gaza will be bombarded on the grounds that it is a weapons storehouse; Palestinian soccer chief Jibril Rajoub’s office in Ramallah will be flattened (not for the first time).

The Czech Republic and Canada will suggest holding friendlies against Israel; Shimon Peres will organize a game between Micronesia and the Palestinians.

But a few months after that, dried out and discouraged, without international soccer or an international diplomatic horizon, questions and doubts will arise. What can Israel do to return from Devil’s Island? Why did they really do all that to it? And, above all, was it worth it? Is it worth continuing the occupation and paying the price, which will only continue to grow? Are the settlements of Itamar and Yitzhar worth being ostracized over?

The sanctions and bans won’t stop at Zurich: FIFA will sound the opening whistle, which some of the world is just waiting for.

Then, when the price becomes intolerable, more and more Israelis will awaken from their indifference. There’s no chance they’ll do this beforehand: they have no reason to – life is good, society is in denial and brains are washed.

A soccer ban doesn’t kill anyone. A boycott spills no blood. It is a legitimate weapon to establish justice and apply international law. Israel supported and supports boycotts, and encourages them: against Hamas, against Gaza, and, of course, against Iran. It even joined the boycott against South Africa, albeit in spite of itself. Now its turn has come.

Can anyone deny that it has been shown the yellow card countless times and continued as if nothing had happened? Should it not be shown a red card over the imprisoning of millions of Gazans, including Gaza’s soccer players?

Does FIFA President Sepp Blatter remember the soccer player whose brilliant future he predicted – Mohammed al-Qatari, from the Al-Amari camp, a student at the Blatter Soccer Academy in Ramallah? Does he know Qatari was killed by an IDF bullet straight to the chest from 70 meters away, while protesting the last war in Gaza? Was that not a crime?

Israel is now wearing its insulted and shocked diplomatic face and trying tirelessly to prevent the evil edict. It might even succeed this time, too. But isn’t it time we all asked, how much longer?