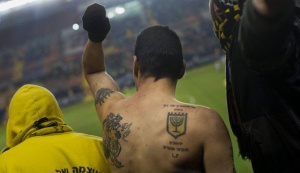 With their racist remarks, their conduct and their antidemocratic legislation, Israeli politicians legitimize the phenomenon called Beitar Jerusalem. Haaretz

(July 19) – The wild behaviour of Beitar Jerusalem soccer fans in Belgium last Thursday should surprise no one. That famous “handful” of fans – which is not a handful, but a large group of a few thousand – long ago took control of the club and is holding it hostage to its racist views, supported by violent actions that are not met with significant punishment by the authorities.

Beitar fans began their rampage in the streets of Charleroi, facing off against fans of the local team. They came to the game itself equipped with flags of the outlawed extreme-right party Kach. These were hung proudly in the stands next to Israeli national flags. The game was stopped at the beginning after dozens of flares were thrown onto the pitch. At the end, they threw an object that struck Charleroi’s goalkeeper on the head and injured him. None of that stopped Beitar’s players from running over to these racists behind the goal and applauding them.

Culture and Sports Minister Miri Regev was quick to denounce the behaviour of Beitar fans, whom she said “stained an entire country.” Prime Minister Benjamin Netanyahu also took the trouble to release a statement: “We will not allow Beitar fans to hurt the image of the country,” he said. However, the problem is not Israel’s image in the world, but the overt racism that is fueled by exactly those same officials who are now condemning it.

Netanyahu and Regev are preaching to others what they themselves do not practice. With their racist remarks (“The Arabs are flocking to the polling stations”), their conduct (threatening the funding of Arab cultural institutions) and their antidemocratic legislation – which is so typical of the government they head – they legitimize the phenomenon called Beitar Jerusalem.

In recent weeks, Haaretz’s sports section has been leading a campaign called “Until an Arab plays for Beitar.” Its goal is to break down the wall of racism that has typified one of the country’s veteran soccer clubs, which in all its 79 years has never seen fit to sign an Arab player.

And yet, the more deeply one looks into the reasons and motives for Beitar’s racist conduct, the more strongly the impression emerges that the problem stems from the forgiving attitude of the authorities around it – from the Israel Football Association to the league administration, all the way to ministerial level. These bodies, using various and sundry pretexts, lend a hand to the phenomenon and allow it to exist – whether by turning a blind eye to it or giving convoluted and evasive explanations (“There is no Arab player who is professionally suitable”).

The time has come to stop talking about image, “education” or “processes,” and start taking practical steps. Alongside harsh penalties for manifestations of racism, Beitar Jerusalem must be given a limited window of time during which it will be required to sign Arab players – even at the cost of a major confrontation with its fans. Instead of condemnation, the time has come to act.

Did Beitar’s fans embarrass you, you nice, tut-tutting lefties?

Until an Arab plays for Beitar Jerusalem…