FIFA, who has its throne and holds court in Zurich, the International Olympic Committee, which rules from Lausanne, and the ISL Marketing company, who conducts its business from Lucerne, manages the World Cup and the Olympics. As we can tell, these three powerful organizations maintain their head offices in Switzerland, a country made famous due to William Tell’s marksmanship, the precision of its watches, and religious devotion to bank secrecy. Coincidentally, all three hold an extraordinary degree of shame when it comes to the money that passes through their hands, and the money that remains in their hands. 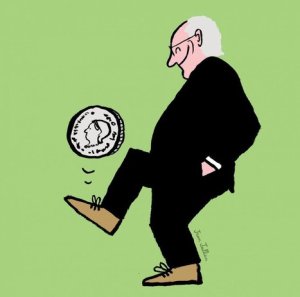 ISL Marketing owns, at least until the end of the 20th century, exclusive rights over stadium advertising, films and videos, logos, banners, and mascots for international soccer competitions. This business belongs to the heirs of Adolf Dassler, founder of the Adidas company, brother and enemy of the founder of its competitor, Puma. When Havelange and Samaranch offered that sales monopoly to the Dassler family, they were acting out of the noble sentiment of gratitude. Adidas, the largest sports clothing manufacturer in the world, had shown considerable generosity when it helped them consolidate their own personal power. In 1990, the Dasslers sold Adidas to French businessman Bernard Tapie, but held on to ISL, which the family runs in association with the Japanese advertising firm Dentsu.

Control over world sport is no small potatoes. At the end of 1994, while speaking in New York to a business association, Havelange let slip a few numbers, something he rarely does:

“I can confirm that soccer generates a total of $225 billion worldwide every year.”

He boasted that such a fortune compared favourably to the $136 billion in sales that General Motors, the world’s largest multinational corporation, posted in 1993.

In the same speech Havelange warned, “Soccer is a commercial product that must be sold as wisely as possible.” And he cited the first law of wisdom in today’s world:

“You have to pay a lot of attention to the packaging.”

The sale of television rights is the most profitable in the lavishly rich mine of international competitions, and FIFA and the International Olympic Committee enjoy the lion’s share of the proceeds from the small screen. That money has multiplied spectacularly since television began to broadcast world championships live to countries throughout the world. The 1993 Barcelona Olympics earned 630 times as much from television rights as the Rome Olympics in 1960, when the broadcast was broadcast only on the national market.

When the moment comes to choose the advertisers for each tournament, Havelange, Samaranch, and the Dassler are perfectly clear about the criteria: the company that pays the most must win the contract. The machine that turns every passion into money cannot afford the luxury of promoting the most healthy or useful products for active sports fans: they simply place themselves at the service of the highest bidder, and they only want to know if MasterCard will pay more than Visa, and if Fuji film will put more money on the table than Kodak. Coca Cola, that nutritious elixir that no athlete’s body can do without, is always at top of the list. Its wealth of virtues makes it unquestionable.

With soccer at the end the century, so wrapped up in marketing and sponsors, it’s no surprise that some of Europe’s biggest clubs are actually companies that belong to other companies. Turin’s Juventus, just like Fiat, is part of the Agnelli Group. Milan belongs to the constellation of three hundred companies of the Berlusconi Group. Parma belongs to Parmalat. Sampdoria, to the oil conglomerate Mantovani. Fiorentina, to the movie production company Cecchi Gori. Olympique of Marseilles moved to the forefront of European soccer when it became one of Bernard Tapie’s companies, until a bribery scandal ruined his successful business career. Paris Saint-Germain belongs to the television station Canal Plus. Peugeot, Sochaux’s sponsor, also owns the club stadium. Philips owns the Dutch club PSV in Eindhoven. Bayer is the name of the two German first-division clubs the company finances: Bayer Leverkusen and Bayer Uerdingen. The inventor and owner of Astrad computers is also the owner of the British club Tottenham Hotspur, whose shares are traded on the stock exchange and Blackburn Rovers belongs to the Walker group.

In Japan, where professional soccer is still young, the largest companies have started their own teams and hired international stars, confident that soccer is a universal language suitable for advertising their businesses the world over. The Furukawa electric company started the Nagoya Grampu club, who signed English striker Gary Lineker. The veteran but ever-brilliant Zico played for Kashima, which belongs to the Sumitomo industrial-financial conglomerate. Mazda, Mitsubishi, Nissan, Panasonic, and Japan Airlines also have their own soccer teams.

The teams may lose money, but that small detail does not matter as long as they project a good image for the constellation of businesses that make up the team. That’s why their ownership is no secret: soccer serves to advertise these companies and there is no greater public relations tool with greater reach in the world than soccer. When Silvio Berlusconi bought Milan, which was bankrupt, he launched a new chapter in the club’s life with all the choreography of a major advertising campaign. One afternoon in 1987, Milan’s eleven players slowly descended from a helicopter down to the center of the field while loudspeakers blared Wagner’s “Ride of the Valkyries.” Bernard Tapie, another specialist in his own protagonism, liked to celebrate Olympique’s victories with huge parties glowing with fireworks and laser beams, where top rock bands performed.

Soccer, the fountain of so much of people’s passions, also generates fame and power. The teams that enjoy some autonomy, because they do not depend directly on other companies, are often run by shady businessmen or second-rate politicians who use the game as means to prestigiously catapult themselves into the forefront of the public eye. There are also rare cases where the opposite is true: men who put their well-earned fame at the service of soccer, like the English singer Elton John, who served as president of Watford, the team he loved, or the movie director Francisco Lombardi, who runs Peru’s Sporting Cristal.

One response to “The owners of the game”