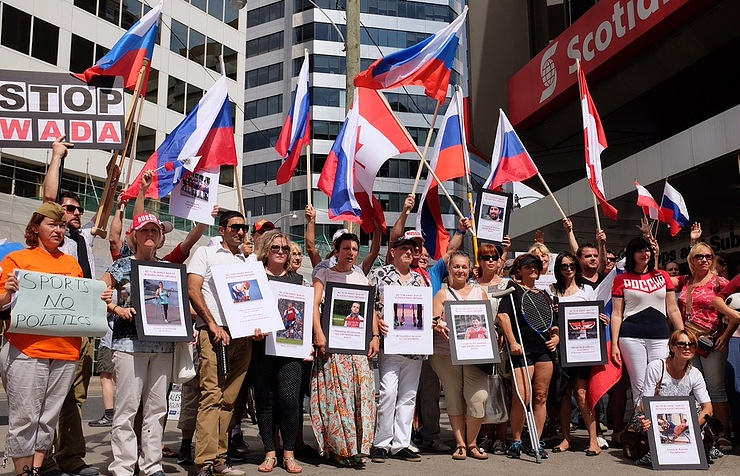 OTTAWA, August 28. /TASS/. A mass action of support for the Russian Paralympic Team, which the International Paralympic Committee banned from the 2016 Paralympic Games in Rio de Janeiro in September took place in Toronto’s downtown on Sunday. Attending it were about a hundred Russians living in Canada.

“Members of various public associations based in Toronto and regular members of the Russian-speaking community came to the action,” Leon Mitsner, the head of the Russian Canada group told TASS. “Our main demand boils down to a revision of the World Anti-Doping Agency’s ruling on a blanket ban of all the Russian Para athletes from the Games.” The protesters also expressed support for the Russian Paralympians.

Mitsner added that participants in the action waved the slogans in Russian and English reading “Shame on WADA”; “Enable Russian Paralympians to join the Games”; and “Say No to Bans”.

On August 23, the Court of Arbitration for Sports (CAS) turned down an appeal by the RPC. IPC President Philippe Craven saud kater the IPC would reallot the 267 licenses Russia had feceived for participation in the Games to international Para sports federations.

The Paralympic Games will take place in Rio from September 7 through to September 18.

Appeal of Russian organizations in Canada

Activists of the Russian community of Toronto, Montreal, and other North American cities will protest against the blanket ban on the Russian National Team of Paralympic athletes from participation in the Rio 2016 Olympics. The decision to ban the athletes demonstrates an absolute disregard for the legal right of people to the presumption of innocence. We cannot allow such blatant attacks on our morals, ethics, and democratic freedoms. Unfortunately, we are witnessing increasing politicization of sports and major sporting events on the planet.

No matter how eloquently officials of the International Paralympic Committee attempt to justify and explain their decision to ban the Russian Paralympians, people around the world understand the real politicization and partisanship behind this unprecedented action. Such restrictions on the participation of the entire team in the Olympic Games cannot disguise the growing Russophobia. We have no doubt that such blatant acts of injustice aim at the denigration and humiliation of Russia through the slandering of her outstanding athletes.

It is our moral duty to our historical homeland to make public our disagreement with this policy of hatred, enmity, and injustice by international sports committees. We are driven by compassion and solidarity with the Russian Paralympic athletes who’ve spent years preparing, overcoming their physical disabilities to earn the right to participate in the greatest international sporting event. They were deprived of their rights with the cruel and inconsiderate decision and without legitimate reasons, other than allegations and insinuations. This is direct and senseless discrimination on a national basis, which we, the citizens of democratic countries, cannot and should not accept as the norm.

On 28 Aug 2016, the United Russian Community of Canada will hold a mass protest in several cities of Canada against the decision of the International Paralympic Committee. We encourage everyone to please come out and join us in voicing support of our Paralympians. They were hit the hardest. Let’s show them our support and solidarity! Please help spread the word about our campaign across the world. People throughout the world should know that we in Canada feel a special responsibility for the unfair and biased report issued by the World Anti-Doping Agency, which initiated and provided the basis for the infamous decision by the IPC.

Together we are the force!