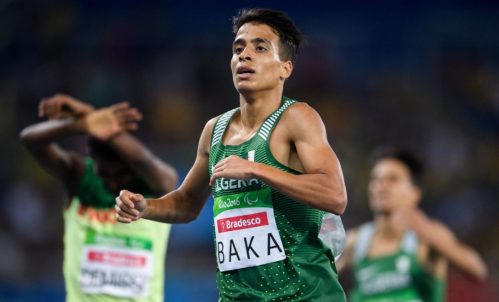 By KATE ALLEN, Toronto Star Science and Technology reporter
(Sept. 13) – After Abdellatif Baka crossed the finish line of the men’s 1,500-metre race at the Paralympics in Rio on Sunday night, winning gold in 3:48.29, the Algerian knelt down and touched his face to the track, then walked over to a TV camera and kissed the lens.

Finishing milliseconds behind him was Ethiopia’s Tamiru Demisse, who nearly edged Baka in the final metres of the race to win silver in 3:48.49. Henry Kirwa, a Kenyan, was a little more than one second back. Fouad Baka, the winner’s twin brother, clocked 3:49.84 for fourth place.

If Sunday’s Paralympic 1,500-metre race had run beside the Olympic 1,500-metre race that occurred in the same stadium three weeks earlier, only then, behind all four Paralympians, would the man who won Olympic gold cross the finish line. American Matthew Centrowitz won his race in 3:50:00, 1.71 seconds slower than Abdellatif Baka.

Amazement at the performance of the Paralympic runners — who competed without guides in the T12/T13 final, a classification for visually impaired runners with the least amount of impairment — has swept around the world since Sunday’s race.

But while celebrating the athletes’ achievements, those in the Parasport community are a little befuddled, and even disappointed, by the world’s response.

“It’s totally awesome . . . it shows that people who are partially sighted or visually impaired can be just as fast as everyone else. And I hope that gets out to the whole world,” said Christine Robbins, a Para-triathlete who competed in Rio and works as a research and policy specialist at the CNIB.

But Robbins also said her fellow athletes had a slightly different response.

“It depends on the exposure everybody gets to people with disability. In the community, we all see each other do all these great things all the time. We all know we can be as good as everyone else, and as strong as everyone else. So it’s not a huge surprise.”
“The reaction to it does show that there is an automatic expectation that someone with a disability is therefore going to perform at a lower level,” said Laura Misener, a professor at Western University’s kinesiology department and a member of the International Centre for Olympic Studies, who specializes in sports and social impact.

Both races were extreme in their own ways. In the Olympic 1,500-metre final, Centrowitz led for almost the entire race, controlling the pace to his liking — keeping the first two laps incredibly slow, and then gunning the final one.

Centrowitz “ran a perfect tactical race,” says Jill Mallon, assistant coach of the University of Toronto Varsity Blues track and field program. “To try and pass him, they have to run (or kick) harder, which is almost impossible to do on a world class runner.”

The Paralympic race played out in the opposite way: the lead changed hands several times throughout the race, and Baka and the other three top finishers pushed each other to the finish, resulting in a world record time for Baka.

David Howe, a Canadian former middle-distance Paralympic runner and a reader in the social anthropology of sport at Loughborough University in London, agrees that the two races were decided based on the “cat and mouse” nature of the distance. But he, too, questions the value in comparing them.

“Guys in wheelchairs have been running 1,500 metres below three minutes for the last 20 years. And we never try to make these comparisons,” he says.

The Paralympics “should be seen as one window to celebrate difference, and to marvel at the performances of the athletes that are out there. Not better or worse, but different.”

Athletes have competed in both the Olympic and Paralympic Games in the past. “Blade Runner” and convicted murderer Oscar Pistorius is surely the most notorious person to do so, but he is not the only one.

Marla Runyan, a legally blind runner, won medals across multiple distances in the Paralympics in the 1990s, and was named to the U.S. Olympic team in 2000. She competed in the 1,500 metres in Sydney. Brian McKeever, a cross-country skier and biathlete, was the first Canadian to be named to both the Paralympic and Olympic teams in 2010, though he didn’t end up starting in the Olympics.

Robbins says that “in general, for me, if people haven’t been exposed to people who are blind or visually impaired, a lot of people think anything we do is amazing. But for us, we do these things every day.”

She points out that the winner of the women’s 100-metre sprint in the T11 classification, for those who are completely visually impaired, only ran 1.25 seconds slower than the Olympic women’s champion.

“They all go really, really fast, and I just wish people would see that.”