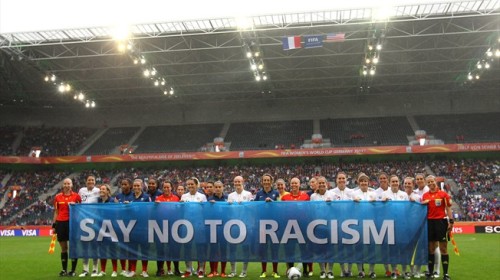 FIFA’s ubiquitous banner. Article 3 of the FIFA Statutes states: “Discrimination of any kind against a Country, private person or group of people on account of race, skin colour, ethnic, national or social origin, gender, language, religion, political opinion or any other opinion, wealth, birth or any other status, sexual orientation or any other reason is strictly prohibited and punishable by suspension or expulsion.”

Jerusalem (October 11) – A senior United Nations official has written to Fifa to reiterate that the UN regards Israeli settlements – and by extension Israeli football teams that play in them – to be “without validity” and “illegal under international law”.

Wilfried Lemke, the UN special adviser on sport for development and peace, said all clubs playing in Fifa-recognised competitions should abide by its statutes – a demand being invoked by pro-Palestinian campaigners who want six settlement clubs to either relocate to Israeli territory or be banned from Fifa competition.

Last year a Fifa committee headed by South Africa’s Tokyo Sexwale was set up to consider complaints against the Israel Football Association (IFA), including the fact that settlement teams play in the occupied territories, apparently in breach of Fifa’s own statutes.

Sexwale sought the UN’s opinion on the situation and the advice is contained in a letter sent to him on 7 October and seen by the Guardian this week. Settlement clubs are due to be discussed at a Fifa meeting on Thursday and Friday (Ocober 13–14).

Fifa’s president, Gianni Infantino, said earlier this month that finding a solution to the dispute over Israeli clubs playing inside the West Bank was a priority before next year’s football world congress.

Six Israeli football clubs based in illegal settlements in the occupied West Bank play in the lower Israeli leagues but on Palestinian land without the permission of the Palestinian Football Association (PFA).

In his letter to Sexwale, Lemke said: “In light of the ongoing dispute between the IFA, PFA and Fifa on Israeli football clubs operating on the occupied Palestinian territories, and acknowledging the relevant United Nations resolutions, I condemn any actions that breach these regulations.”

Adding that he hoped the issue could be resolved through negotiation, Lemke said: “The United Nations security council has determined that Israeli settlements in occupied territory have no legal validity, as they are in breach of international law, and that such practices are an obstruction to achieving a comprehensive, just and lasting peace in the Middle East.

“The UN recognises sport as a fundamental human right and, as such, it advocates and facilitates the realisation of such a right by everyone. Without undermining the right of Israeli and Palestinian people to sport, all teams playing in recognised Fifa competitions should abide by the laws of the game.

“I therefore urge a resolution of any disputes in line with the United Nations security council resolutions and Fifa statutes within a reasonable timeframe.”

Sexwale’s committee was set up after the collapse of a Palestinian initiative at last year’s Fifa congress to have Israeli football suspended over a variety of issues.

The Israeli Football Association has been resisting efforts to have settlement clubs relocated to Israel or banned from competition.

Last month Shlomi Barzel, an IFA official, told the Guardian he believed the UN should ultimately rule on the issue. “It is very simple – this has nothing to do with Fifa,” Barzel said. “This is something the UN should decide. Those areas are disputed.”

A Human Rights Watch report published in September argued that “settlement playing grounds, including one indoor hall, are built on land that has been unlawfully taken from Palestinians”. It said financial documents it had reviewed showed the IFA was engaging in business activity that supported the settlements and that “the clubs provide services to Israelis but do not and cannot provide them to Palestinians, who are not allowed to enter settlements except as labourers bearing special permits”.

The IFA and the clubs involved say a ban on playing in settlements would punish children involved with the clubs, as well as the clubs themselves, and that Fifa has no authority to define what is Israeli territory.

(October 12) – More than 60 members of the European Parliament have asked FIFA via an open letter to expel at least five clubs from FIFA events and the Israel football association – including Beitar Ma’ale Adumim – or move them to areas within Israel.

“FIFA should rule that settlement clubs either fully relocate within Israel’s internationally recognized borders or are excluded from the Israeli Football Association,” the letter says.

The MEPs cite FIFA rules which say that no club can play on the territory of a different association without its consent and that of FIFA.

“Sport simply has rules and I believe that FIFA must stick to its own rules, with international law applying as well,” says one of the MEPs, German Left Party member Fabio de Masi.

“We don’t discuss either whether a harsh tackle on the pitch is a red card or not.” Israeli settlements are seen as a major obstacle in the peace process, with some 550,000 settlers living in the area, according to human rights organization Bethselem.