(August 18) – The Golden State Warriors are set to snub President Trump and reject an invitation to visit the White House following their NBA championship success, according to Finals MVP Kevin Durant.

Despite hailing from Washington, 28-year-old Durant will not take up any invitation from President Trump as he does not “respect” him following a string of controversial comments in the public domain.

President Trump has been criticised for defending individuals in the “Unite the Right” march, which saw white supremacists, neo-Nazis and Ku Klux Klan members gather in Charlottesville and led to the death of one counter-protester.

It is common for the President of the United States to invite America’s championship-winning teams across basketball, American football, baseball and ice hockey to visit the White House, but President Trump’s reign in office has led to some sportsmen rejecting the invitation and Durant confirmed he will be one of those.

“Nah, I won’t do that,” Durant told ESPN. “I don’t respect who’s in office right now.

“I don’t agree with what he agrees with, so my voice is going to be heard by not doing that.”

While Durant admitted that the decision to go to the White House is an individual one for every members of the victorious Warriors team, he suggested that he will not be alone in rejecting an invitation that arrives.

“[If] I know my guys well enough, they’ll all agree with me,” he added.

It would not be the first team that members of a sports team rejected Mr Trump’s invitation, with a number New England Patriots players deciding against going to the White House after their Super Bowl victory earlier this year.

President Trump’s comment this week has led to worldwide condemnation after he defended white supremacists in the wake of the Charlottesville protest, and having already had doubts over his ability to lead the country, Durant now admits that the country has taken a “turn for the worse” under President Trump’s tenure.

Having followed the first black president in Barack Obama, President Trump has, in Durant’s eyes, undone a lot of the progress that was achieved during the last eight years in reducing the racial divide that has blighted the United States’ history.

“I feel ever since [Trump’s] got into office, or since he ran for the presidency, our country has been so divided, and it’s not a coincidence,” Durant said. 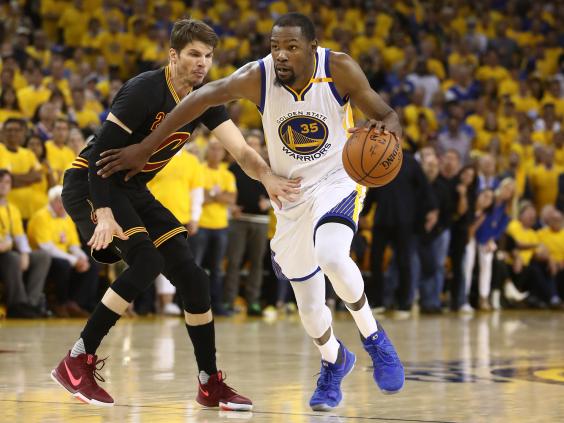 “When [Barack] Obama was in office, things were looking up. We had so much hope in our communities where I come from because we had a black president, and that was a first. So to see [what happened in Charlottesville] and to be where we are now, it just felt like we took a turn for the worse, man.

“It all comes from who is in the administration. It comes from the top. Leadership trickles down to the rest of us. So, you know, if we have someone in office that doesn’t care about all people, then we won’t go anywhere as a country. In my opinion, until we get him out of here, we won’t see any progress.”