ABC News (Feb 23, 2018)  – When Yahoo! Sports published documents from the FBI’s investigation into corruption in college basketball, it showed that players from more than 20 of the nation’s top programs were implicated in possibly breaking NCAA rules. It’s a complicated case with a lot of layers, so here is a breakdown of the key teams, players and others who have been involved since the charges were first unveiled in September:

The following teams were mentioned in Yahoo!’s report. Other teams such as Auburn, Arizona and Oklahoma State were implicated when the original charges came out last September.

How Arizona fits in

Arizona released a statement saying Miller and the school agreed for him not to coach the Wildcats’ game Saturday against Oregon, citing the “best interests of the University and the basketball program.” The school announced that Ayton, who is averaging 19.9 points and 11.2 rebounds per game this year, was eligible to play.

The Arizona board of regents met in an emergency executive session Saturday “to receive legal advice regarding the issue and plans to reconvene for updates and legal advice in the coming days.”

“This is an emotionally charged issue but it is essential that we move forward decisively and based on facts,” Regents chair Bill Ridenour said in a statement. “We must do everything we can to ensure that our programs are of the highest caliber as we must also protect the rights of all involved and respect due process for employees.”

A lawyer representing the family of Ayton called allegations involving the Arizona star freshman false and urged the FBI, the NCAA and the university to come out publicly and clear Ayton’s name.

In a statement, attorney Lynden B. Rose said Ayton’s family is “outraged and disgusted” by reports that “have falsely implied that her son or his family have any involvement in illegal or prohibited activities regarding his decision to matriculate at the University of Arizona.”

Andy Miller: A prominent former NBA agent and the founder of ASM Sports. He represented the likes of Kevin Garnett, Kristaps Porzingis and Kyle Lowry but relinquished his certification in December amid unfolding allegations that his agency was heavily involved in the college basketball scandal. Miller’s computer was seized last year in an FBI raid. Teaming with Dawkins, Miller issued four- and five-figure payments to several high school and college players, according to Yahoo! Sports.

Christian Dawkins: The sports agent, former youth tournament director and AAU figure who is alleged to have been instrumental in conspiring with others implicated in the scandal to arrange payments to each of the four assistant coaches arrested in September. Before opening his own agency, Dawkins, 25, worked for Miller’s ASM Sports.

Dennis Smith Jr.: The rookie point guard for the Dallas Mavericks received a five-figure payment, according to documents, before his time at NC State. Smith was named the ACC freshman of the year in 2016-17 and was selected last year with the ninth pick of the NBA draft.

Isaiah Whitehead: A second-year point guard for the Brooklyn Nets, he reportedly received a five-figure payment while at Seton Hall. Whitehead is the most high-profile recruit to have signed with coach Kevin Willard at the school and led the Pirates to a Big East tournament title in 2016.

Edrice “Bam” Adebayo: A rookie center with the Miami Heat, Adebayo received a five-figure payment before his one season at Kentucky, according to documents. He was drafted with the 14th pick last year.

Markelle Fultz: The top pick in the NBA draft last year of the Philadelphia 76ers, he was given $10,000 before his one season at Washington, documents obtained by Yahoo! indicate.

Kyle Kuzma: The former Utah star reportedly received nearly $10,000 while in school. A first-round pick who currently plays for the Los Angeles Lakers, Kuzma was a first-team All-Pac-12 pick last year as a junior.

P.J. Dozier: A former McDonald’s All American, Dozier was reportedly paid more than $6,000 while in school at South Carolina. He helped lead the Gamecocks to the Final Four last year as a sophomore and has played for the Mavericks and the Oklahoma City Thunder this season after going undrafted.

Josh Jackson: A freshman star at Kansas last year on the Jayhawks’ Big 12 title team, he was drafted fourth overall by the Phoenix Suns. Jackson’s mother, Apples Jones, is reported to have received a payment of $2,700.

These are key figures who emerged when the charges were first announced in September:

Chuck Person: The Auburn assistant employed by coach Bruce Pearl since 2014. Person previously served as an assistant with four NBA teams after 14 seasons as a player in the league. He played at Auburn from 1982 to 1986. He was fired after the November indictment.

Lamont Evans: Fired on Sept. 28 by Oklahoma State after six months on the job. Evans previously worked at South Carolina and was alleged, while at both schools, to have accepted payments.

Emanuel “Book” Richardson: The Arizona assistant employed by coach Sean Miller at the school since 2009 and previously at Xavier. Richardson was accused of accepting payments to steer players. He was fired on Jan. 11.

Tony Bland: The USC associate head coach employed by coach Andy Enfield since 2013. Bland was accused of accepting payments to steer players and was fired in January by USC; he was the last of four assistants named in the original report to lose his job.

Jim Gatto: The senior Adidas marketing executive at the center of the scheme, according to federal officials, to direct payments to prep players and their families in exchange for their commitments to play at Adidas-sponsored college programs. He was widely known in college basketball as a key dealmaker in the apparel and shoe industry.

Merl Code: The Adidas consultant, former Nike employee and Clemson basketball player charged with federal wire fraud for his work with Gatto to funnel payments to prep players and their families.

Brian Bowen: The No. 14-rated prospect in the recruiting class of 2017, he signed with Louisville and ultimately played a key role in the toppling of coach Rick Pitino. Bowen was identified in the initial FBI findings as a prospect who received payment. Yahoo! reported that Dawkins paid for $1,500 in plane tickets for Bowen and that his family received at least $7,000 in benefits. Bowen joined coach Frank Martin’s team at South Carolina in January and has not been cleared by the NCAA to play.

Jonathan Brad Augustine: Former AAU director and youth coach implicated in September as a co-conspirator in the scandal. Federal prosecutors asked a judge in early February to drop charges against Augustine.

Munish Sood: The financial adviser named in September by federal officials, he was accused of arranging at least $22,000 in payments to Evans. Sood formed a sports management firm in 2017 with Dawkins and also directed payments to Bland and Richardson in exchange for influence, according to the feds. Sood was not among the eight men indicted in November.

Rashan Michel: The former NCAA referee arrested in September who owned an Atlanta-based clothing company and was alleged to have arranged $91,500 in payments to Person for the coach’s influence. Michel reportedly outfitted many NBA and NFL stars.

Rick Pitino was taken down at Louisville because of the FBI investigation into college basketball, but that was just the beginning. Doug Buffington/Icon Sportswire

Sept. 26: The FBI and United States Attorney for the Southern District of New York announced the arrests of 10 men, including assistant coaches Person, Evans, Bland and Richardson, in connection with fraud and corruption schemes under investigation since 2015. The federal officials alleged that the coaches took cash bribes from business managers and financial advisers in exchange for the coaches’ influence to direct selected players and their families to retain the services of the advisers who provided the bribes once the players entered the NBA. Additionally, a senior executive with Adidas was accused by the feds of working with the corrupt advisers to funnel payments to high school players and their families in exchange for the players’ commitments to attend Adidas-sponsored schools.

Oct. 16: Pitino was fired by Louisville, completing the Hall of Fame coach’s separation from the school after he was placed on administrative leave on Sept. 27 — one day after the unveiling of the scandal by federal officials. Louisville was fingered by the feds for directing money from Adidas to two high school prospects, including Bowen.

Oct. 18: Tom Jurich was fired with cause as athletic director at Louisville.

Nov. 7: Eight of the 10 men arrested in September — the four coaches, plus Gatto, Code, Dawkins and Michel — were indicted by a federal grand jury in New York. 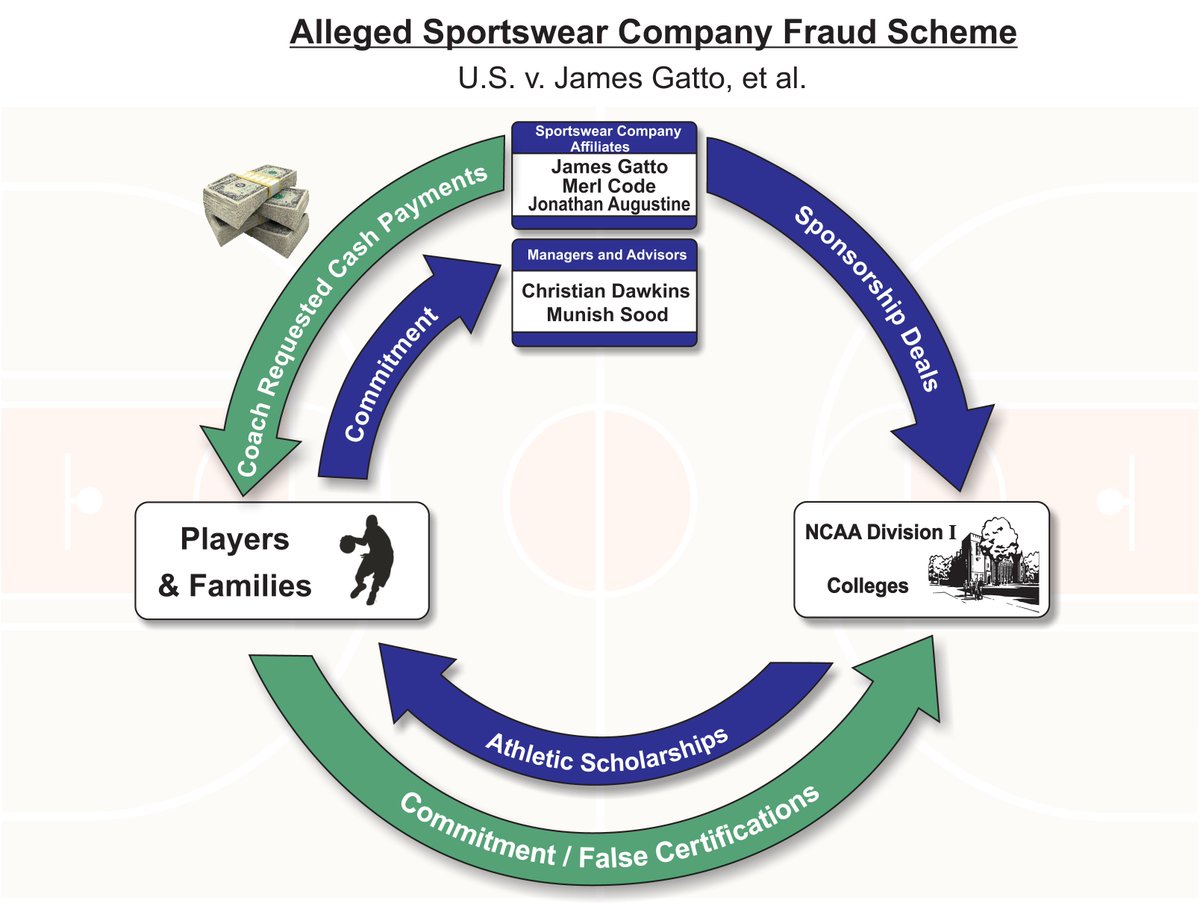 (SBNATION) The report and underlying documents included in it don’t make the timetable of all the loans clear. The FBI’s case revolves in large part around agents’ efforts, with the help of other powerful people in the sport, to steer prospects to sign with them upon turning pro.

Those parties are former NBA agent Andy Miller, his former business associate Christian Dawkins, and Miller’s agency, ASM Sports. (Miller hasn’t been arrested or charged in the case, but the NBA’s players union took away his agent certification in December, removing him from that business.)

Many of them took the form of loans, to be recouped by agents once a player became a professional:

There are more players listed, including some who have made big names for themselves in the NBA. Raptors guard Kyle Lowry, who went to Villanova, Mavericks center Nerlens Noel (Kentucky), and Knicks forward Kyle O’Quinn (Norfolk State) are among them.