Are sports organizations playing a role in America’s obesity problem? 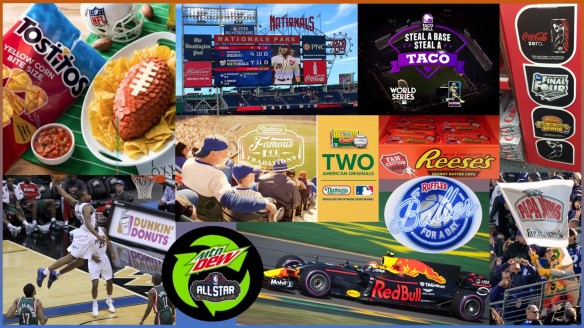 Last September, the National Football League struck a deal with Frito-Lay that allowed the company to produce limited-edition bags of Tostitos tortilla chips, with each package bearing the logo of one of 19 featured NFL teams. Several months earlier, Major League Baseball announced that Nathan’s Famous would be its first-ever official hot dog. Now the first-ever comprehensive analysis of such food and beverage sponsorships by major sports organizations shows just how pervasive these deals are. The confusing messages they send about physical fitness and healthy eating habits can’t be helping our national problem with obesity [1].

Among the 10 sports organizations that young viewers watch most, from the NFL to Little League, the NIH-funded research team identified dozens of sponsors and hundreds of associated advertisements promoting food and beverage products. The vast majority of those ads touted unhealthy items, including chips, candies, sodas, and other foods high in fat, sodium, or sugar, and low in nutritional value.

Those findings are especially concerning in light of the latest figures from the National Health and Nutrition Examination Survey (NHANES), co-supported by NIH [2], It shows that, despite long-standing public health efforts to curb the obesity epidemic, more than 18 per cent of young people in America remain obese. Among adults, the picture is even more discouraging: nearly 40 per cent of American adults were obese in 2015-2016, up from about 34 per cent in 2007-2008.

Marie Bragg, a recipient of a 2015 NIH Director’s Early Independence Award at New York University School of Medicine, New York, has long been interested in understanding the influence of popular culture and celebrity endorsements on our health. In the study reported in the journal Pediatrics, she set out to explore what she saw as an obvious paradox: sports fans celebrate athletes at the pinnacle of physical fitness while being bombarded by advertisements in the stadium and on TV that promote unhealthy eating habits.

While it was clear that food and beverage companies spend millions of dollars on sports sponsorships, Bragg wanted to capture a broad and objective survey of these partnerships and the products they promote. Bragg’s team relied on Nielsen’s television ratings for sports programs in 2015 to identify the 10 organizations whose televised events were most frequently watched by American kids, aged 2 to 17. Those organizations included the NFL, MLB, National Hockey League (NHL), National Basketball Association (NBA), Fédération Internationale de Football Association (FIFA), National Collegiate Athletic Association (NCAA), and Little League Baseball.

Next, they scoured the web—including official sports organization and food company websites, YouTube, and the Kantar Media AdScope database—to identify corporate sponsors of those sports organizations. The study found that food and non-alcoholic beverage companies accounted for almost 20 per cent of all corporate sponsorships. The NFL had the most, followed by the NHL and Little League.

The researchers identified nutrition information associated with all identified food and beverage products and assigned a score to each based on an objective set of guidelines used to identify nutritious value in the United Kingdom and Australia. (The U.S. doesn’t have a comparable measurement system.) The system places foods on a 100-point scale called the Nutrient Profile Index (NPI). An NPI of 64 or higher qualifies a food product as being “nutritious.” Anything less indicates the product is calorie rich and nutrient poor.

Bragg teased out a number of interesting findings:

The data show that young people watched televised sports programs, featuring sponsored products from the various sports organizations, more than 412 million times in 2015 alone. The ads also received more than 196 million additional views that year on YouTube. These hundreds of millions of views are a concern because food advertisements are known to influence children’s food preferences and purchase requests.

Meanwhile, according to the latest NHANES data reported by Craig Hales and colleagues in JAMA, a representative sample of almost 17,000 American kids, age 2 to 19, shows that almost 1 in 5 is obese. Obesity in adults is defined as having a body mass index (BMI) of 30 or more. (BMI is calculated as weight in kilograms divided by height in meters squared.) Children are considered obese when their BMI places them at or above the 95th percentile for their sex and age on a Centers for Disease Control and Prevention (CDC) growth chart.

Overweight kids are at risk of becoming unhealthy adults. Indeed, a sample of about 27,500 adults in 2015-2016 showed that obesity among adults is on the rise, with about 4 in every 10 adults considered obese. Those increases have been consistent across men, women, and adults of all age groups.

It’s clear that when it comes to better understanding the varied causes of obesity and advancing toward more effective ways to help people keep the weight off, we’ve got our work cut out for us. But if sports organizations have the power to encourage unhealthy eating habits, perhaps more health-conscious marketing strategies by these influential organizations could help tip the balance—and the scale—in a healthier direction. We call on them to re-examine their current approach.