An affront to history: Giro d’Italia’s ‘sport-washing’ of Israeli apartheid

Despite Italian media’s partaking in Israel’s ‘sport-washing’, hundreds of Italians protested at various stages of the race. Israel paid $12 million to RCS Sport for the Giro promotion. | RAMZY BAROUD* 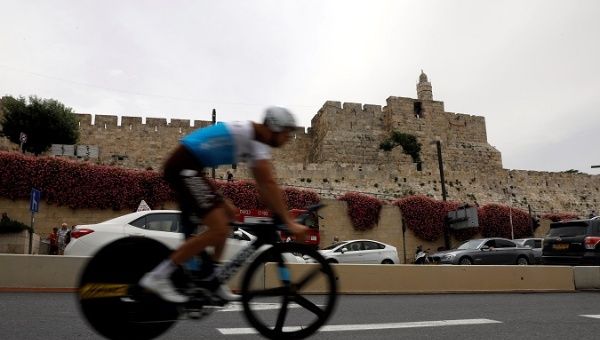 A rider practises opposite to the David Tower of Jerusalem’s Old City before the beginning of Stage 1. | Reuters

For the first time since its inception in 1909, the legendary Italian cycling race, Giro d’Italia kicked off outside Europe and, strangely enough, from the city of Jerusalem on May 4.

The inherent contradictions in that decision are inescapable. Italy is a country that has experienced a ruthless foreign occupation and was ravaged by fascism and war. To be a party in Israel’s constant attempts at whitewashing or, in this case, “sport-washing’ its military occupation and daily violence against the Palestinian people is appalling.

Every attempt aimed at dissuading the race organizers from being part of Israel’s political propaganda has failed. The millions of dollars paid to the Giro d’Italia organizers, the RCS Sport, seemed far more compelling than shared cultural experiences, solidarity, human rights and international law.

Legendary Italian novelist, Dino Buzzati wrote various accounts in Italian newspapers in the 1940s, describing the symbolism of the race in the context of a battered nation resurrecting from the ashes of untold destruction.

Just after WWII had ended, Giro d’Italia organizers found themselves contending with the seemingly impossible task of organizing a race with a few bicycles and even fewer athletes. The roads were disfigured and destroyed in the war, but the determination to triumph was stronger.

The 1946 Giro D’Italia, especially the legendary competition between Fausto Coppi and Gino Bartali, became a metaphor of a country rising from the horrors of war, reanimating its national identity, symbolized in the final struggle between heroic athletes pedaling through the torturous mountainous roads to reach the finish line.

Understanding this history, Israel exploited it in every possible way. In fact, the Israeli government recently gave the late Gino Bartali an honorary Israeli citizenship. The decision was made as an acknowledgment of the Italian athlete’s anti-Nazi legacy. The irony, of course, is that the Israeli practices against Palestinians – military Occupation, racism, Apartheid and abhorring violence –  is reminiscent of the very reality that Bartali and millions of Italians fought against for years.

When Israeli officials announced last September that Giro D’Italia would start in Jerusalem, they laboured to link the decision with Israel’s celebration of 70 years of independence.

Also, 70 years ago, Palestinians were dispossessed from their homeland by Zionist militias, leading to the Nakba, the catastrophic destruction of Palestine and the establishment of Israel as a Jewish state. It was then that West Jerusalem became part of Israel, and the rest of the Holy City, East Jerusalem, was also conquered through war in 1967, before it was officially, but illegally, annexed in 1981, in defiance of international law.

RCS Sport cannot claim ignorance regarding how their decision to engage and validate Israeli Apartheid will forever scar the history of the race. When their website announced that the race would kick off from ‘West Jerusalem’, the Israeli response was swift and furious. Israeli Sports Minister, Miri Regev and Tourism Minister, Yariv Levi, threatened to end their partnership with the race, claiming that “in Jerusalem, Israel’s capital, there is no East or West. There is one unified Jerusalem.”

According to international law, East Jerusalem is an occupied Palestinian city. This fact has been stated time and again through United Nations resolutions, including the most recent Resolution 2334, adopted on December 23, 2016. It condemns Israel’s illegal settlement constructions in the Occupied Territories, including East Jerusalem.

This reality stands as a stark contradiction to the claims made by Giro d’Italia organizers that their race is a celebration of peace. In truth, it is an endorsement of Apartheid, violence and war crimes.

The fact that the race was held according to plan, despite the ongoing killing of Palestinian protesters in Gaza, also underlines the degree of moral corruption by those behind the effort. Over 50 unarmed Palestinians have been killed since the start of the peaceful protests at the Gaza border, known as the ‘Great March of Return’ on March 30. Over 7,000 were wounded, among them 30 athletes, according to the Palestinian Ministry of Youth and Sports.

One of those wounded is Alaa al-Dali, a 21-years-old cyclist whose leg was amputated after being shot on the first day of protests.

‘Canadian-Jewish philanthropist’, Sylvan Adams, one of the biggest funders of the race, claimed that his contribution is motivated by his desire to promote Israel and to support cycling as a ‘bridge between nations.’

Palestinians, like Alaa, whose cycling career is over, are, of course, excluding from that lofty, and selective definition. Was the 12 million dollars received by the organizers from Israel and its supporters a worthy price to ignore the suffering of Palestinians and to help normalize Israeli crimes against the Palestinian people?

Sadly, for the RSC Sport, the answer is ‘yes’.

Many Italians, and more around the world, of course, disagree. Despite Italian media’s partaking in Israel’s ‘sport-washing’, hundreds of Italians protested at various stages of the race.

The fourth stage of Giro d’Italia, which was held in Catania, Sicily, was delayed by a protest, against a race which is “stained with the blood of Palestinians”, in the words of activist, Simone Di Stefano.

Renzo Ulivieri, the head of the Italian Football Managers Association, was one of prominent Italian voices that objected to the decision to hold the race in Israel. “I could have remained indifferent, but I fear I would have been despised by the people I respect. Viva the Palestinian people, free in their land,” he wrote in Facebook post.

The RCS Sport has done the ‘Giro’ race, sport cycling and the Italian people an unforgivable disservice for the sake of a few million dollars. By agreeing to start the race in a country that is guilty of apartheid practices and a protracted military occupation, they will stain the race forever.

However, the general wave of indignation caused by this reckless decision seems to indicate that Israel’s efforts at normalizing its crimes against Palestinians are failing to alter public opinion and perception of Israel as an occupying power – that deserves to be boycotted, not embraced.

– Romana Rubeo, an Italian writer, contributed to this article.

– Ramzy Baroud is a journalist, author and editor of Palestine Chronicle. His forthcoming book is ‘The Last Earth: A Palestinian Story’ (Pluto Press, London). Baroud has a Ph.D. in Palestine Studies from the University of Exeter and is a Non-Resident Scholar at Orfalea Center for Global and International Studies, University of California Santa Barbara. His website is www.ramzybaroud.net.