Two fans, James Lockett and Billy Grant, were among an official party who paid tribute in the city’s Hall of Military Glory, in the heart of the Mamayev Kurgan memorial park commemorating the Battle of Stalingrad. 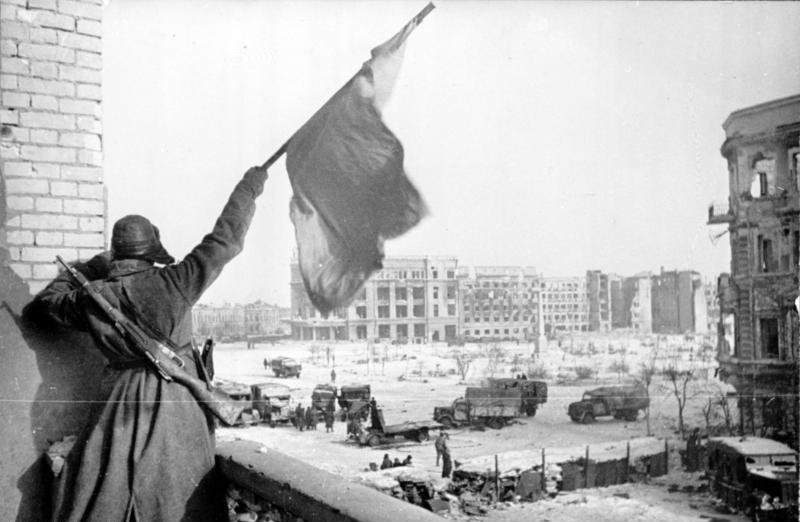 “It’s really important to stand shoulder to shoulder with the people of Volgograd,” said Clarke.

Three Lions manager Gareth Southgate pointed to the “perspective” the war-ravaged history of Volgograd, which was formerly known as Stalingrad, had given his team ahead of the World Cup opener against Tunisia last night.

“We’re aware of the history of the city, the importance of that battle in the second world war,” Southgate said over the weekend. “It’s something that is in the past, but you respect the people who lost their lives who fought together.

“There’s a lot of talk about relationships between our country and Russia, but the history there is very strong from that period.

“To see the [Motherland Calls] statue and have an understanding of the history reminds you that some things are even bigger than football. That’s good for us all.”

A huge monument known as The Motherland Calls looms on the hill overlooking the Volgograd Arena and the memorial park is a short walk away from the stadium.

And more than a dozen England fans turned out to watch the ceremony, which began with a short display by the Russian soldiers who guard the site.

The 1942-3 Battle of Stalingrad was one of the bloodiest in history, with estimates suggesting the number of troops killed, captured or wounded on both sides totalled nearly two million.

The Soviet defence of the city, on the banks of the Volga river, was a turning point for the Allies against Hitler’s forces in the second world war.

The city is also twinned with Coventry, after women from the Midlands city wrote to express support during the war.

Ms Skoll wrote in a book of commemoration: “May our bonds between the people of the UK and Russia remain forever strong and enduring.”

She told reporters: “As you know the links between the UK and this great city are strong and enduring.

“They were forged during the second world war, with shared experience of destruction and devastation and immense bravery, and started by 900 women in Coventry, who sent messages of support and solidarity to their sisters in Stalingrad.”

Ms Skoll spoke about shared values between the two nations.

And she added: “Given the immense suffering of Volgograd and the pivotal part it played in the route towards victory I think it’s only fitting that the 2018 World Cup should have Volgograd as one of its host cities, after all Volgograd today plays host to people from all over the world including Great Britain, who are here in peace and with a common purpose.”

Mr Grant, a Brentford fan who lives in north London, said he was “very honoured” to be representing England at the event.

“I’m into football, you’re into football but when you have an event like this you realise it’s more than just football.

“People have given up their lives and for us we need to pay respect to the people that have done that because that was a very important moment in World War Two.”

World Cup fans in the heart of the Mamayev Kurgan memorial park, with the Motherland Calls statue in the background

An England fan at the memorial to the people killed during the defence against the nazis in what was then known as Stalingrad, now called Volgograd.

ENGLISH football fans who laid a wreath today at the breathtaking Motherland Calls war memorial in Volgograd honoured the Soviet Union’s war dead and the anti-fascism for which they died.

The city, once known as Stalingrad, was all but destroyed in the epic second world war battle that marked a decisive turning point to guarantee nazi Germany’s defeat.

Blockaded Red Army soldiers fortified factories, office blocks and houses and defended on a building-by-building and street-by-street basis, being bombed by planes, tanks and artillery and suffering shortages of equipment and food.

Nazi forces, egged on by Hitler to record an iconic victory by taking the city named after Soviet leader Joseph Stalin, were sucked into hand-to-hand fighting that recorded previously unknown levels of casualties.

In a classic case of the biter bit, German Sixth Army troops who had driven the Soviet defenders into a small piece of territory by the Volga river were encircled as Red Army reinforcements turned the nazi flanks in a pincer movement.

Despite efforts by Berlin to reinforce Field Marshal von Paulus’s besieged forces, they had to surrender after a battle that began in August 1942 and lasted until February 1943.

The defeat ended German efforts to take the Caucasus, with its oil wealth, and to drive on to the Urals and the likely demise of the Soviet Union.

Soviet losses were over a million, but the Red Army prevailed, setting in train a series of offensives that continued until it captured Berlin.

Stalingrad was crucial to the entire outcome of the anti-fascist war and British and US political leaders spared no effort during the war to honour that reality. Parisians named a Metro station for Stalingrad after their own liberation.

Postwar political divisions between the anti-fascist Allies, resulting in the cold war, conspired to create a cover-up of how crucial Stalingrad and subsequent engagements were for freeing Europe from the nazi yoke.

While respect is due to all who fought on the Allied side, the Red Army — not just Russians but citizens from all Soviet republics — bore the brunt of the conflict.

Stalingrad and the Motherland Calls memorial bear testament to that heroic role and provide a constant reminder of the need to unite against the scourge of fascism.