Mexico defeated defending World Cup champion Germany 1-0 on June 17th, producing the best win of the opening round. Mexico was ranked 15th in the world by FIFA and had never before defeated Germany in an official match. Germany topped the list entering the tournament. Mexico’s counterattacking and pace was first-class and they should have scored more.

Nevertheless, as the German squad desperately counter-attacked in the final minutes – they peppered the Mexico goal but were strangely off target with 26 shots, although only nine found the target – the TV broadcaster (a Brit) at least referred t least two times to the “tired legs” of the Mexicans, as if it was the Central Americans who were in desperate shape and just hanging on by the skin of their teeth – in seeming contrast to the fit and superior über athletes of Germany.

The über athletes peppered the Mexico goal but the “best players in the world” were strangely off target with 26 shots; only nine found the target.

The Mexican players train at an altitude of 2,250 m (7,200 feet) above sea level. Yet the British broadcaster’s chauvinism about the Latino players reminded one of “Deutschland, Deutschland, über alles in der Welt” (“Germany above all, above all in the world”).

Mexico had come flying out of the blocks from the start. Coach Osorio had stated ahead of the game that his team would go toe-to-toe with Germany because he believed in his team and especially the midfielders.

Mexico superbly held the defending champions at bay to wrap up a landmark win.  “The real key for Mexico,” acknowledged Tom Marshall of EPSN, “was the collective, the way the players pressed and harried the Germans into mistakes all over the field and then showed the steel to hold onto the one-goal lead.” (“Lozano the hero as Mexico stun Germany,” ESPN.Retrieved 18 June 2018)

“The way El Tri played out from the back, competed in the air with a much bigger German side and created chances was especially impressive,” he added.

Belying the racist slander about “tired legs”, he noted that despite the German pressure in the second half “Still, Mexico managed to create. They should have doubled the advantage in the 54th minute when Hernandez and Vela went through on goal, only for Hernandez putting too much weight on the pass for his former Chivas teammate. El Tri also had a penalty shot in the 70th when Hernandez went down under pressure from Mats Hummels.”

Coach Joachim “Low’s side had no answer to Mexico’s counter-attacks in transition and looked fragile, a trait not usually associated with Die Mannschaft.” 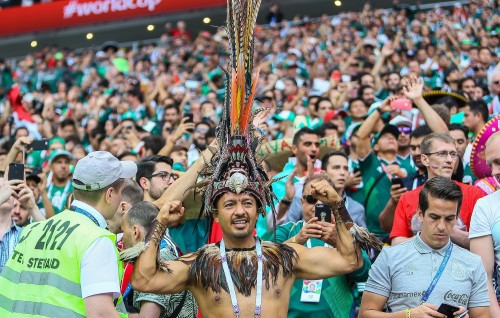 The match was attended by some 30,000 Mexican fans

Wikipedia informs that Mexico has qualified to sixteen World Cups and has qualified consecutively since 1994, making it one of six countries to do so. The Mexico national team, along with Brazil and Germany, are the only nations to make it out of the group stage over the last six World Cups. Along with Germany, Brazil, Italy, Argentina, France, Spain and Uruguay, Mexico is one of eight nations to have won two of the three most important football tournaments (the World Cup, Confederations Cup, and Summer Olympics), having won the 1999 FIFA Confederations Cup and the 2012 Summer Olympics.

Mexico’s best progression in World Cups has been reaching the quarter-finals in both the 1970 and 1986 World Cups, both of which were staged on Mexican soil.

Mexico is historically the most successful national team in the CONCACAF region, having won ten confederation titles, including seven CONCACAF Gold Cups and three CONCACAF Championships (the precursor to the Gold Cup), as well as three NAFC Championships, one North American Nations Cup, and one CONCACAF Cup. Mexico is the only team from CONCACAF to have won an official FIFA competition, winning the 1999 FIFA Confederations Cup. Although Mexico is under the jurisdiction of CONCACAF, the national team has been regularly invited to compete in the Copa América since 1993, finishing runner-up twice – in 1993 and 2001 – and obtaining the third-place medal on three occasions.”

Mexico pulling away from the CONCACAF pack