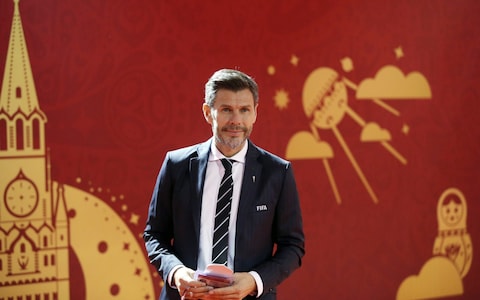 It also includes them being ordered to play their first two World Cup qualifiers without any fans following racist chanting in friendlies against Hungary and Israel.

It had previously been fined three times at Euro 2012 for various supporter offences, including the display of illicit banners and monkey chants directed at Italy striker Mario Balotelli.

But since launching its anti-discrimination monitoring system in 2015, its has not only imposed stadium bans on the country but has fined the HNS a total of 230,000 Swiss francs (£174,675) for discriminatory chants and banners in their World Cup qualifier against Kosovo and their play-off with Greece.

Even as long ago as 2008, Fifa fined the HNS £14,920 over monkey chants directed at Emile Heskey during England’s 4-1 World Cup qualifying win in Zagreb.

An unequivocal commitment by Croatia to stamping out racism among their fans would be grounds for mitigation in any punishment imposed upon them.

But there have been mixed messages on that front, most notoriously surrounding the case of Josip Simunic.

Fifa banned the defender for 10 matches in 2013 for directing Croatia supporters in a fascist chant following a match against Iceland. [The Croatian football player made the Ustashe salute shouting “Za dom!” (“For the homeland!”), and the audience yelled back “Spremni”, (“Ready!”) – Ed.]

Not only did the HNS – whose president is national-team legend Davor Suker – brand the sanction excessive, it appointed Simunic as the country’s assistant manager within weeks of his suspension expiring.

After being ordered to play the home Euro 2016 qualifier against Italy behind closed doors, the federation also turned on an activist it accused of “informing” on his own country.

Fifa had previously announced two sanctions against the HNS at the World Cup – a fine of 13,000 Swiss francs (£9,865) for fighting in the stands during Croatia’s win over Argentina (when their fans were more victim than culprit) and one of 70,000 (£53,174) for their players’ consumption of “non-authorised beverage products”.