Historic gold for United Korea: Players cried, the audience was on their feet

A HISTORICAL day for Korean sport. A mixed pair in table tennis – a South Korean player and a North Korean player – won the gold medal, the first gold medal for united Korea after 27 years at the Korean Open held in Daejon.

Jang Woo-jin from the south and Cha Hyo Sim from the north beat their Chinese opponents 3: 1 at the Korean Daejon Championship.

The last gold medal in any Korea-united sport also came in table tennis, and the women’s team won the World Gold in 1991.

“Wailing from the audience, ovation and winding. It was wonderful. All this gives me extra strength,” said Jang Woo-jin, adding:

‘When I saw how Hyo Sim cries during the medal award ceremony, my heart broke down because I realized that we should soon forgive.” 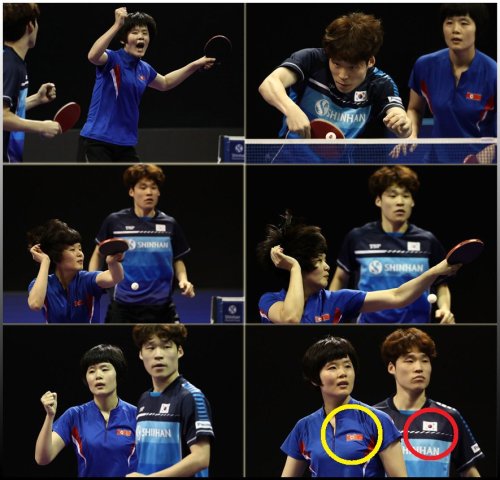 The conquest of this gold is a continuation of the cooperation of the two countries after they marched into the 2018 Pyeonchang Winter Olympics under common flag in February, after several decades of tension on the Korean Peninsula.

The Parade of Nations, with Greece leading the way as the historic founding nation of the Olympics, followed by all the other countries in alphabetical order according to the Korean language. The parade concluded with the 180 athletes from the DPRK and ROK marching as one behind the Unification Flag, to the accompaniment of the Korean folk song Arirang, the anthem of reunification in both north and south. They received a standing ovation.
Above, photo shows joint Korean delegation entering PyeongChang Olympic Stadium at the opening ceremony, February 9, 2018, ending the parade of nations. The Korean Unification Flag takes centre stage and flashes across the stadium seats with the name “Korea.”
The Korean delegation was led by flag bearers Hwang Chung Guam of the DPRK, a member of the unified Korean women’s hockey team, and ROK bobsledder Won Yun-jong.

In April, South Korean President Moon Jae held a meeting with Kim Jong-un of the Democratic People’s Republic of Korea (DPRK) during which they promised to continue and develop co-operation in the sport. Both countries announced that they will have joint teams in canoeing, rowing and women’s basketball at the Asian Games to be held in Jakarta and Palembang, Indonesia in August.

For your information: Positive developments in inter-Korean relations

a follow-up to the historic June 12 DPRK-U.S. Summit held in Singapore between Kim Jong Un, Chairman of the State Affairs Commission of the DPRK and Donald Trump, President of the U.S. This first ever meeting of the leaders of the two countries produced a Joint Statement that reflected the spirit of reconciliation between the two leaders and their desire to work together in a new and positive direction, setting aside the past, and to co-operate with each other to fully realize the denuclearization of the Korean Peninsula and peace. 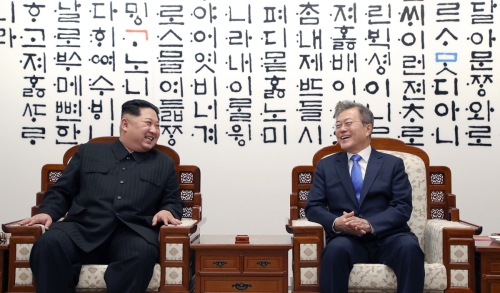 Meeting in Panmunjom, April 27, 2018, at which an historic declaration was signed between Kim Jong Un, Chairman of the State Affairs Commission of the DPRK and Moon Jae-in, President of the ROK.

Inter-Korean relations have been making progress with concrete actions being taken by both sides in the implementation of the historic Panmunjom Declaration of April 27 signed between Kim Jong Un, Chairman of the State Commission of the Democratic People’s Republic of Korea (DPRK), and Moon Jae-in, President of the Republic of Korea (ROK). The Panmunjom Declaration is the blueprint to further develop and strengthen inter-Korean relations in a number of key areas under the banner – By the Nation Itself.

The high-level talks held by ROK lead negotiator Minister Cho Myung-gyon and Ri Song Gyon, lead negotiator for the DPRK on June 1 decided to “establish a joint liaison office in the Kaesong Industrial Complex permanently staffed by government officials as soon as possible to draw up the technical measures for this.” The Kaesong Industrial Complex was established in 2004 to facilitate a very successful economic collaboration between the DPRK and the ROK. Eleven companies representing ceramics, textiles, technology, household goods and other items from the ROK established factories at Kaesong that hired workers from the DPRK to manufacture goods for the Korean and foreign markets. Over 170 ROK firms were involved by the project’s end. The project was unilaterally scrapped by the anti-communist Park Gyeun-hye regime in the south in 2013 to the consternation of the Korean people who finally ousted her from power in 2016.

On July 5, talks took place at Peace House in the south side of Panmunjom, on north-south cooperation in forestry. It was decided that the DPRK and ROK will work together to deal with stewarding the forests near the Demilitarized Zone that divides Korea and also tackle the issue of insects and other pests that are impacting the forestry industry. It is hoped that this will lead to other projects, such as reforestation.

On June 26, officials from the DPRK and ROK met to discuss upgrading and linking rail lines to facilitate inter-Korean trade and tourism. In the previous period of positive inter-Korean relations sparked by the June 15, 2000 North South Declaration, freight service was started between the south and the north to supply the Kaesong Industrial Complex and to transport finished products to the south.

On June 28, talks were held on road transportation and both sides agreed to work together to modernize the roads on the east and west coast of the DPRK and establish road links to facilitate trade and tourism between the north and the south.

It was also decided on July 2 to re-establish ship-to-ship radio communication, which was dormant for a decade, to prevent accidental clashes between naval vessels from the DPRK and ROK around the Northern Limit Line in the West (Yellow) Sea, the maritime boundary between the north and the south.

On May 4, the ROK government suspended the practice of launching provocative balloons and leaflet campaigns against the DPRK and took down the loud-speakers that projected anti-DPRK messages across the De-militarized Zone.

Several meetings have already taken place between military representatives from the DPRK and ROK to further establish working relations.

Seoul demonstration for peace on Korean Peninsula at time of Trump visit, November 5, 2017.

On June 18, sports talks were held at Peace House. The joint press release following the talks reported that two items were brought forward on the agenda for cooperation and exchange. It was decided that inter-Korean unification basketball games will be held in Pyongyang in July and in Seoul in August.

As a result of this decision, a team of 100 male and female basketball players from the ROK and 50 coaches and support staff travelled to Pyongyang from July 4-7 for a series of friendly matches. The games were played between teams of mixed south and north Korean players, named “Peace” and “Prosperity.”

The dates chosen were significant: on July 4, 1972 the first historic agreement was signed between the DPRK and ROK which set out the principles by which the Korean people could achieve the peaceful, independent reunification of their divided country – the reunification of Korea would be achieved independently, peacefully, and through their own political unity, setting aside all their differences.

It has also been decided that a Unified Korean team of athletes from the DPRK and the ROK will take part in the Asian Games to be held in Jakarta and Palembang, Indonesia in August.

On June 22, the Red Cross from the ROK and DPRK met at Mount Kumgang in the DPRK to discuss the re-establishment of family reunification meetings to bring together families separated by the Korean War. The next family reunions will take place the week of August 15 at Mount Kumgang on the occasion of the 73rd anniversary of Korea’s liberation from Japanese occupation. Since family reunifications began in 2000, some 23,000 Koreans have had the opportunity to meet family members face-to-face or via video-link.

During inter-governmental talks held by Minister Cho Myung-gyon and Kim Yong Chol, Vice-Chairman of the Workers’ Party of Korea on July 5 in Pyongyang, both sides pledged to work more closely together to accelerate, strengthen and deepen inter-Korean relations and take practical measures to implement the Panmunjom Declaration.

(With files from Hankyoreh, KCNA.)