Despite threats by U.S. president, players persist in taking a stand in favour of social justice. The protests objectively target the state and its character as a racist state with impunity to kill and to disregard the rule of law, at home and abroad. This is a just and significant stand by all the athletes and the millions of Americans and people around the world who have joined in expressing support for them.

(New York Times reports) The NFL’s 2018 season began in earnest Thursday with the first full slate of exhibition games, and the question that had dogged the league all summer — would players continue social justice protests during the playing of the national anthem? — was answered loud and clear.

Malcolm Jenkins of the Philadelphia Eagles, one of the most outspoken players in recent years, was joined by his teammate, De’ Vante Bausby, in raising a fist while the anthem was played. As had been customary in the past, Chris Long, a veteran defensive end, stood next to Jenkins with a hand on the defensive back’s shoulder.

Elsewhere, Kenny Stills and Albert Wilson of the Miami Dolphins knelt during the anthem before their team’s game against the Tampa Bay Buccaneers, while their teammate, Robert Quinn, raised his fist.

ESPN reported that four members of the Jacksonville Jaguars (Telvin Smith, Jalen Ramsey, Leonard Fournette and T.J. Yeldon) waited in the tunnel until after the anthem had concluded before their team’s game against the New Orleans Saints, and USA Today reported three members of the Seattle Seahawks (Quinton Jefferson, Branden Jackson and Duane Brown) did the same before their team’s game against the Indianapolis Colts.

Stills and Wilson, the only players who have been confirmed to have knelt during the anthem Thursday, received praise on social media from Colin Kaepernick, the inactive player whose protests as a member of the San Francisco 49ers started this movement. 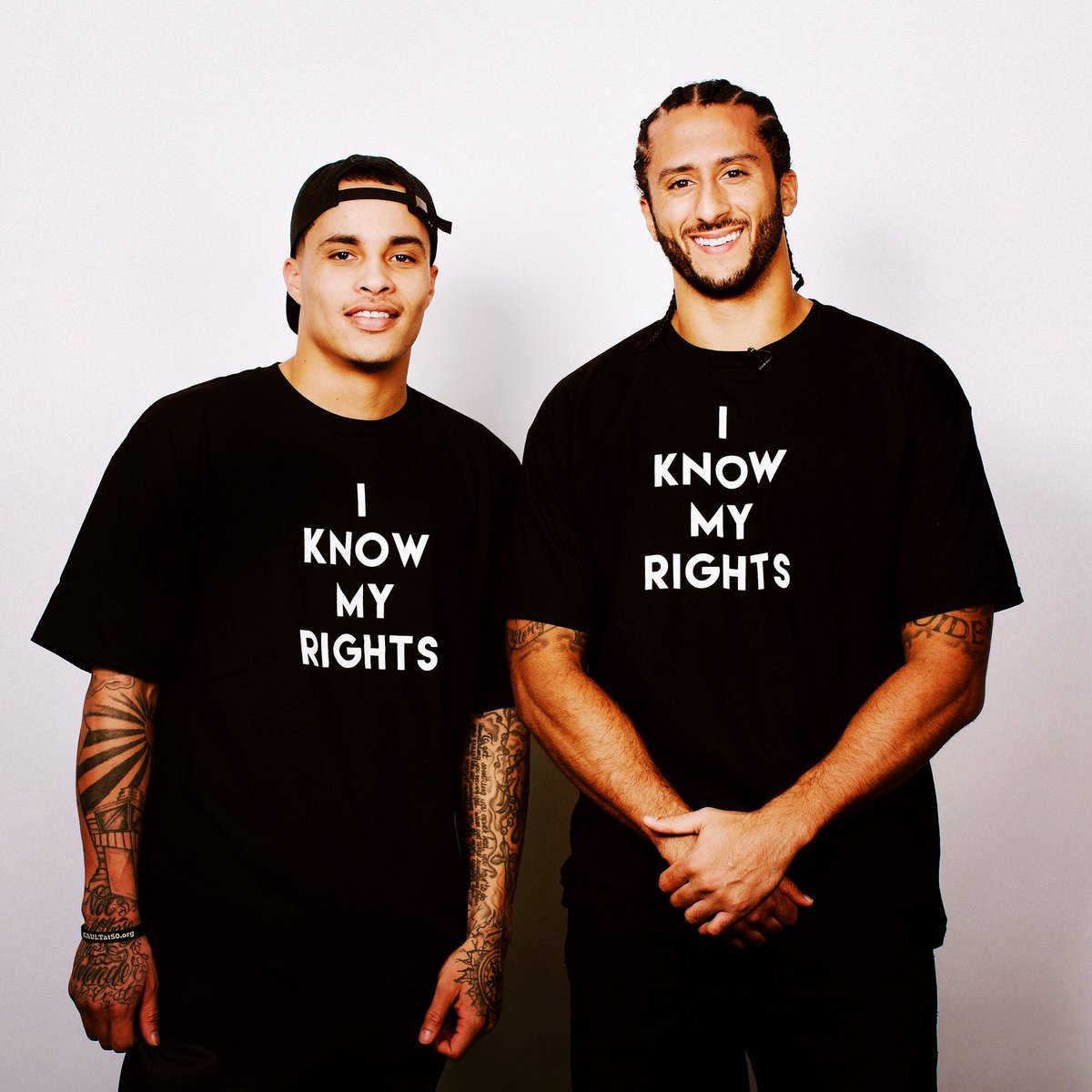 In a notable shift, the 49ers, who had been one of the more active political teams in previous years, did not appear to have any players kneeling during the anthem before their game against the Dallas Cowboys, although Marquise Goodwin, a wide receiver, had his right arm raised for the duration of the song.

The raised fist was a return to form for Jenkins, who had stopped this particular demonstration midway through last season after he and a coalition of players secured increased funding for social issues from the league. On Thursday, Jenkins and some of his teammates on the defending champion Eagles took the field for warmups wearing T-shirts highlighting various statistics about racial disparities in prisons.

That Jenkins went back to demonstrating was not surprising after his strong reaction to recent changes in the league policy regarding behavior during the anthem.

“Quite frankly, guys in our league don’t like being told what to do, what they can and can’t do,” Jenkins told Philly.com. “We don’t have this type of policies for the other causes we support, whether it be our ‘Salute to Service,’ or breast cancer awareness, or anything else. It’s just when you start talking about black folks, quite frankly. It’s disheartening, but we’ll continue to be creative.”

The protests came less than three months after the league, without consulting the players union, updated its rules to obligate players to stand on the field during the anthem or remain in the locker room. Previously, players were obligated to be on the field but were only encouraged to stand.

During the past two seasons, dozens of players across the league protested during the anthem to raise awareness of social injustice and police brutality against black people. The protests turned into a full-blown crisis for the league last September when President Donald Trump criticized the league’s owners for not penalizing players who protest.

In response to backlash from the president and some fans, the league tightened its policy, which now includes potential fines against teams whose players protest. The league has allowed teams to decide on their own whether they want to penalize players directly.

It was unclear whether the protests Thursday would continue in the weeks ahead. Some players may have just wanted to show their displeasure with the new policy, while others may have wanted to stand up to Trump.

No players protested when the NFL kicked off its 2018 season last week when the Baltimore Ravens and the Chicago Bears played in the Hall of Fame Game in Canton, Ohio.

Most members of the Bears locked arms while the anthem was being played, which was not strictly a protest but a sign the team was united. The Ravens stood during the anthem.

Over the summer, players across the league have said they are opposed to the league’s new policy. Some players, most notably defensive tackle Jurrell Casey of the Tennessee Titans, said they would continue to protest and pay any fines if necessary.

At the same time, teams issued their own proclamations. Last month, Dallas Cowboys owner Jerry Jones said that he expected everyone on his team to stand for the anthem and not stay in the locker room. His son, Stephen, added that players who did not follow the team’s directive would be cut.

Cornerback Richard Sherman of the 49ers accused Jerry Jones of having a “plantation mentality.”

Other owners have been more conciliatory. Jed York, whose family owns the 49ers, abstained from voting on the new policy. Chris Johnson, the acting owner of the New York Jets, said players who protested would not be penalized.

In Florida, Miami Dolphins coach Adam Gase said he would not discuss the anthem issue with his players and did not want to be caught between the owner’s rules and the players.

“I’m coaching football,” he told The Palm Beach Post. “I’m not dealing with all of this.”

The players who protested on Thursday may not be penalized. After the NFL Players Association filed a grievance in July arguing that the new policy violated the NFL’s collective bargaining agreement, the league agreed to freeze the enforcement of the policy while it tries to work out a potential solution with the union.

Kaepernick, the player who was the first to protest in 2016, has not returned to the NFL. He filed a grievance against the league, accusing the owners of conspiring to keep him out of a job.

The league appears to be going to great lengths to tamp down any hint of protest. According to Pro Football Talk, Electronic Arts, which makes the Madden video game, deleted Kaepernick’s name, along with various profanities, from the song “Big Bank” by YG, which serves as a soundtrack to the video game. Electronic Arts later claimed the deletion was a miscommunication about the company’s ability to reproduce Kaepernick’s likeness in the game, and the company vowed to restore the references to his name.

Eric Reid, Kaepernick’s teammate on the 49ers who also regularly knelt during the playing of the national anthem in 2016 and 2017, is also unsigned. He, too, has filed a grievance against the league.