To reach that point, however, has been a case study of what soccer is in the 21st century, of all that it has become, that is hard to beat: a story of vested interests and power grabs, of broadcasters dictating what is on their screens, and of governments, and governing bodies, running a sport not for its own sake but for their own good.

The mess started before it started, with Conmebol’s decision to allow River to reach the final despite twice breaking the rules on the way: first by fielding an ineligible player against Racing in the round of 16, and then by looking the other way when its coach, Marcelo Gallardo, defied a touchline ban to speak to his players at halftime in the semifinals.

Then, last Saturday, came those chaotic hours after River fans had attacked the bus carrying Boca’s players and staff on its way to the Monumental. Boca, as it surveyed the injuries sustained by some of its squad, declared that it did not want — that it was not able — to play the game. Gallardo, the River coach, immediately insisted his team would not play if its opponent was in no state to do so. 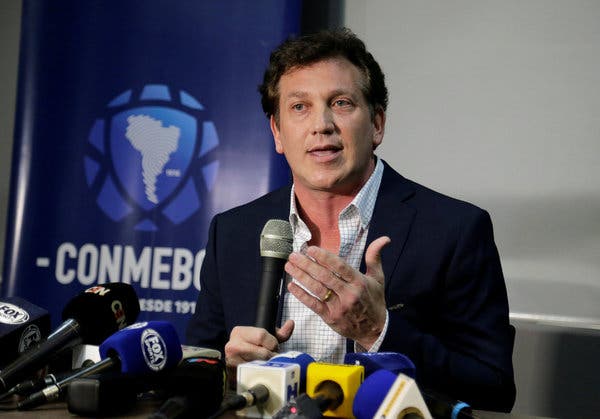 Their voices, though, were drowned out: by Conmebol, South American soccer’s governing body, eager not to suffer the embarrassment of being forced to cancel its showpiece event; by the television networks carrying the coverage, suddenly facing hours with nothing to broadcast; by the timetable imposed on Argentina by the looming G20 summit and the tacit pressure exerted, in the buildup, by the country’s president, Mauricio Macri, who saw this game as a chance for his nation to show that it had “grown up” and could play “in peace.”

Only when Rodolfo D’Onofrio and Daniel Angelici, the presidents of River and Boca, reached what they called a “gentleman’s agreement” not to play was a decision reached; by that stage, the 70,000 fans in the stadium had been told three times — admittedly partly for reasons of crowd control — that the game would be starting momentarily. Come back Sunday, they were eventually told. At the end of it all, the fans were assured, there will be a game.

Except, no, there was not. There were only a couple of thousand fans inside the Monumental at 2 p.m. on Sunday when Alejandro Dominguez, the president of Conmebol, appeared on television to declare that the match had been canceled yet again: Boca felt it was at too much of a disadvantage, with two of its players still wearing eye patches, to play. Conmebol, Dominguez said, would decide when — and, importantly, where — to play the game at a meeting at its headquarters in Paraguay two days later.

What followed would make a comprehensive opening chapter whenever a historian comes to write the story of soccer’s cash-soaked golden age, when it became the plaything of nation states and media giants, dominated by the whims of self-aggrandizing executives and content-hungry broadcast networks. 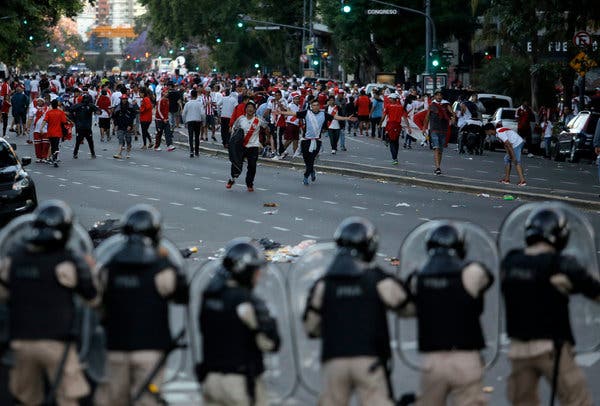 First, Conmebol decided — unilaterally, with no apparent agreement and perhaps even a silent acquiescence from the Argentine government — that the country had proved itself incapable of hosting such an event.

Instead, the deciding game would be played abroad, and with both sets of fans permitted to enter. That both River Plate and Boca Juniors had agreed there had to be “equal conditions” for both teams for the contest to be fair, and that moving it overseas deprived River of its home leg of the final, did not appear to matter.

A number of cities expressed an interest in hosting, some more reasonable than others. Medellin, in Colombia, made a pitch; so, too, did Belo Horizonte, in Brazil. Miami was an option until Carlos Cordeiro, the president of U.S. Soccer, reportedly made clear his opposition. Genoa, in Italy, volunteered its services, thanks to its historic links to Boca Juniors.

The most compelling offer came from the Middle East: Doha, Qatar, the host of the 2022 World Cup, offered a lucrative package to stage the game, with the unique selling point being its proximity to Abu Dhabi, where the winner would have to be days later for the start of FIFA’s Club World Cup. 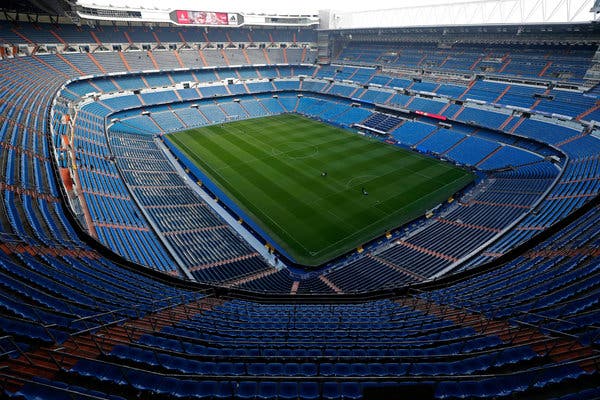 What attracted them all — what created this perfect encapsulation of the present moment — was the history, the glamour, the authenticity of River Plate against Boca Juniors, two of the game’s most famous names in what is, arguably, soccer’s most intense rivalry. These cities, across the world, were prepared to pay for the privilege of hosting the color, the noise, the passion: the content. That is what soccer has become: an entertainment complex squabbled over by fiefs and autocrats, a way of exerting soft power and measuring importance that is worth almost any price, a circus paid for in bread.

In the end, though, Conmebol ignored all of them, preferring instead what even Dominguez himself called the “crazy” idea of staging the game in Madrid, at the Santiago Bernabeu, the home of Real Madrid. Dominguez said he had mentioned the plan in a private call with Florentino Pérez, Real’s president. Pérez agreed “within two minutes.”

Dominguez’s decision had some logic behind it: Spain has a large Argentine population, and Madrid’s Barajas airport is well-connected to Latin America. The time difference with Argentina means the game can be held at an hour attractive to broadcasters in Europe and the Americas, and the Bernabeu has a proven record of hosting major sporting events: Some 4,000 police are likely to be mobilized for next week’s game, as they were for the Champions League final in 2010. And, of course, the Bernabeu is an eye-catching setting for an eye-catching game.

What it did not have was the approval of the clubs. River Plate does not want to cede home advantage, or play in front of both sets of fans (visiting supporters were banned from the Buenos Aires games), or to give up the gate receipts it was set to earn from the biggest fixture of its year. Boca Juniors does not want to play at all, believing that River is responsible for the violent incidents around its stadium that caused the postponements, and should be forced to forfeit the game and the trophy. It has announced its intention to take its case as far as the Court of Arbitration for Sport.

Nor does the decision have a moral authority. The day before the second leg was supposed to be played, Dominguez sat in an office in his luxury hotel in Buenos Aires and declared, solemnly and sincerely, that he would not “tolerate any more violence.”

“Violence is not the same as passion,” he said.

The next day, he was given chance to prove it: River, if found culpable, should have been thrown out of the tournament. Allowing the game to go ahead, in some lights, condones the incident; it sends the message that the punishment for such infractions is only a mild inconvenience, that it might yet lead to glory.

And, though Conmebol has said it will compensate River Plate for the lost revenue, that does it take into account the vast majority of fans, not the handful intent on violence but the tens of thousands who bought tickets for a game so hotly anticipated that even the napkins at the Monumental had been especially inscribed. “I was at the Superfinal,” they read.

Most of those who had tickets will not be able to travel to Madrid; flights are prohibitively expensive for the vast majority of Argentines. Some will make it, of course; that is the cost of dedication. Others will come from Spain, and from Europe and Asia, eager to be there for this little moment of history.

But what they will get will be a pale imitation, a simulacrum, designed by executives in boardrooms, decided by power brokers in private, staged for the benefit of the television cameras. This is what soccer is now, and what it may well be in years to come: UEFA is likely to see this game, should it go ahead, should Boca’s latest legal appeal fail, as a green light to take the Champions League final — its own showpiece — outside Europe: to the Middle East, to North America, to wherever the money on offer is most persuasive.

At the end of it all, there will — or there may, anyway — be a game. Once the broadcasters and the governments and the authorities have had their say, once they have decided what it will look like, and who may be allowed to attend, there will be a game. But it is not the same game as it used to be. To some extent, it is barely a game at all.

For your information: Conmebol

The South American Football Confederation (CONMEBOL, /ˈkɒnmɪbɒl/; Spanish: Confederación Sudamericana de Fútbol; Portuguese: Confederação Sul-Americana de Futebol or CSF) is the continental governing body of football in South America (apart from Guyana, Suriname and French Guiana) and it is one of FIFA’s six continental confederations. The oldest continental confederation in the world, its headquarters are located in Luque, Paraguay, near Asunción. CONMEBOL is responsible for the organization and governance of South American football’s major international tournaments. With 10 member football associations, it has the fewest members of all the confederations in FIFA.

The World Cup qualifiers of CONMEBOL have been described as the “toughest qualifiers in the world”, for their simple round-robin system, entry of some of the top national teams in the world, levelling of the weaker national teams, climate conditions, geographic conditions, strong home stands and passionate supporters. Currently, the Confederation is planning to create the first women’s qualification to the FIFA Women’s World Cup to replace the Copa América Femenina.

On 27 May 2015, several CONMEBOL leaders were arrested in Zürich, Switzerland by Swiss police, and indicted by the U.S. Department of Justice on charges of corruption, money laundering, and racketeering.[8] Those swept up in the operation include former CONMEBOL presidents Eugenio Figueredo and Nicolás Léoz and several football federations presidents such as Carlos Chávez and Sergio Jadue. On 3 December 2015, the CONMEBOL President Juan Ángel Napout (Paraguay) was arrested also.