In memoriam: Paul Sherwen, 62, the Voice of the Tour de France

The cause was heart failure, his wife, Katherine Love Sherwen, said.

For 33 editions of cycling’s most famous race, starting in 1986, Mr. Sherwen teamed with Phil Liggett to provide live commentary for broadcasts in English-speaking countries, including the United States. Even casual cycling fans knew who “Phil and Paul” were.

With Mr. Sherwen behind the wheel, the pair would drive to the finish line of each stage of the three-week Tour de France and squeeze into a tiny booth packed with television monitors, cameras, lights and computers inside a two-story trailer.

“They are hot and stuffy, compact working quarters,” Mr. Liggett said in a telephone interview from South Africa, where he lives.

While Mr. Liggett generally called the race, particularly the final kilometre, Mr. Sherwen drew on his time as a professional racer and seven-time Tour entrant to explain cycling’s sometimes opaque tactics to viewers and otherwise fill airtime during broadcasts that, for some stages, ran on for as much as six hours.

Part of Mr. Sherwen’s job involved gently correcting Mr. Liggett’s errors, like misidentifying riders on the screen — an inevitable part of live commentary. And when helicopter-mounted cameras fixated on ancient buildings or particularly striking landscapes, Mr. Sherwen turned into a tour guide, if an occasionally mischievous one. When an impressive chateau appeared onscreen, he would sometimes say that King Louis XIV had slept in it, whether true or not.

The two men rarely spoke over each other. Mr. Liggett said he would signal that he wanted to speak by squeezing Mr. Sherwen’s knee. Mr. Sherwen’s sign was pointing a single finger in the air. 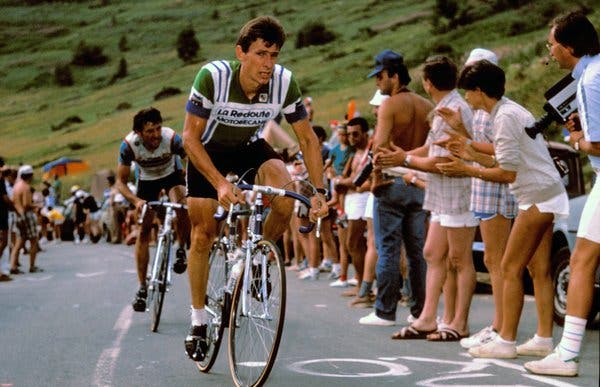 Sherwen competing in the 1980 Tour de France. A seven-time entrant in the tour, he later became a popular television commentator | John Pierce/PhotoSport Int., via Shutterstock

“I just clicked with him,” Mr. Liggett said.

Mr. Liggett approached Mr. Sherwen to be his on-air partner early in the 1985 season at the Paris-Nice race. The British broadcaster Channel 4 had planned to introduce daily live coverage the next season, and Mr. Liggett, a cycling journalist who had been commenting for brief packages of prerecorded highlights since 1978, said he thought he needed help in the announcers’ booth.

Around that time, Mr. Sherwen said that he was leaving European teams behind to race for Raleigh Banana, a small British-based squad that would not qualify for entry into the Tour.

Mr. Sherwen retired from racing in 1987 after taking two British champion titles, but he remained tied to the sport. He became the manager of Raleigh Banana and later served as spokesman for the American team sponsored by Motorola, the first to hire Lance Armstrong, who became a friend.

More races were added to their schedule over time, and eventually Mr. Sherwen and Mr. Liggett traveled the world to provide commentary for most of the major races, starting each year in Australia during its summer. Mr. Sherwen once estimated that they spent about 150 days on the road each season.

John William Paul Sherwen was born on June 7, 1956, in Widnes, England, near Liverpool. His mother, Margaret (McGowan) Sherwen, was a homemaker; his father, John, was an industrial chemist with Imperial Chemical Industries. When Paul was 7, Imperial Chemical moved the family to Uganda, where his father ran a fertilizer factory.

After attending boarding school in Kenya, Mr. Sherwen moved back to Britain, where he discovered cycling. Unusually for a European professional cyclist, he went to university, receiving a degree in paper technology at the University of Manchester Institute of Science and Technology.

After Mr. Sherwen graduated in 1977, he became the first of a wave of English-speaking riders to follow what would become a standard apprenticeship for turning pro in Europe, joining the Athletic Club de Boulogne-Billancourt in suburban Paris. An amateur team, it was affiliated with the venerable professional squad sponsored by Peugeot, the automobile and bicycle maker.

Life with the team was far from glamorous. Housing was spartan, and the non-French riders received no funding or food. But Mr. Sherwen showed enough promise that he turned professional the next season, with a team sponsored by the rival carmaker Fiat.

As Mr. Sherwen and the other English speakers made their way to the Tour de France, they came to be known as the “Foreign Legion.”

Mr. Sherwen spent most of his European career with a French team that was sponsored by a mail-order clothing house, La Redoute. His job was not to win but to assist the team’s stars. Because Mr. Sherwen was open and optimistic in an environment often marked by suspicion and disappointment, and because he spoke several languages, Mr. Liggett said, the team often relied on him to boost morale.

Mr. Sherwen met Katherine Love, then an ABC Sports production assistant, during the 1989 Tour de France. In addition to her, his survivors include a daughter, Margaux; a son, Alexander; and a sister, Jayne Sherwen Adey.

After years of visiting Africa, Mr. Sherwen moved his family to Uganda in 1999. He took over a gold mine there with a friend of his father’s, running it while pursuing his broadcasting career.

“To bring a little baby to the middle of the bush, that was a bit of a shock to the system,” Ms. Love Sherwen said. “But it was a beautiful thing in the end.”