Pello Bilbao of Team Astana is hugging the top cylinder of his bike, his butt off his seat, his head and upper chest extended over the front bars, looking like a tree sloth on a favorite branch. This human missile is traveling 45 miles per hour on this long descent in the Tour de France.

How much control of the bike, I later asked Bilbao, did you have when you were tucked down like that? He shrugged.

Vaya con dios and all that.

Victory in the Tour de France often turns on minutes, seconds even, over a three-week, roughly 2,200-mile race — this year from the English Channel to the Mediterranean and back to Paris. In those weary days of racing across cobblestone and gravel and through humid river valleys, no test looms as quite so intimidating and grand as the mountain chains, the Pyrenees at the end of the second week and the Alps at the end of the third.

To race up those mountains as a rider is to feel your lungs compress and your red blood cells leak oxygen and the lactic acid in your legs swell. Once at the top, Tour de France cyclists look for any possible advantage on the way down, no matter how flatly nuts.

The idea is for the cyclist to slip off his bike seat and mold his body around the bike. In this way a cyclist can minimize the drag of air across his head, arms and legs. It’s striking to watch and remarkably unsafe, as a rider cannot brake until back in the seat. It also might not be quite as fast as cyclists think (more on that in a minute).

The origin story of the tuck is difficult to locate, although most agree it is no more than a decade old. Many cyclists credit or blame snowboard culture and its ethos of joyous, hallucinatory risk-taking. 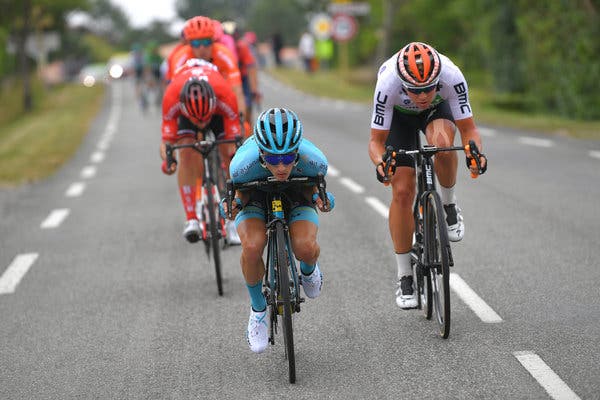 The British champion Chris Froome, who is injured and missing this Tour, has used the super-tuck descent, and he is one of the few who can pedal while in that position, which by the way adds to his risk. The French cyclist Julian Alaphillippe — who possesses an acrobat’s control on his bike and the lead in this year’s Tour — has embraced the super tuck. So far no one has plunged off a cliff, although a few have come close.

A few days ago in the medieval city Albi, I walked over to the CCC team’s manager, Jim Ochowicz, a longtime veteran of the cycling wars. What do you make of the super tuck? He shook his head, dolefully.

“I would never recommend it, not even to an enemy,” he replied. “You become a cannonball.”

I put the same question to Dan Martin, a lean-to-the-point-of-gaunt — O.K., a ubiquitous description of cyclists — racer from Ireland. He rides with UAE Team Emirates and has been outspoken. Risk is encoded in cycling, he said. He gets that. But come on …

“There is a part of us that is the perpetual child always wanting to go as fast as we can down the hill,” he said. “But I wouldn’t recommend anyone try this at home. It’s truly dangerous.”

Martin suggested I head to YouTube to see video of what happened to Philippe Gilbert, a 37-year-old who rides for Deceuninck–Quickstep, during last year’s Tour de France. Gilbert was in the super tuck when he reached a corner along the same stretch of road where I saw Pello whiz past. It did not end well.

Flying down the mountain, Gilbert rounded a corner into a turn that was sharper than he realized. In the second it took him to slip back atop his seat and hit the brakes, he ran out of road: His bike collided with a stone wall, he popped up like a jack-in-the-box and then disappeared over the side.

Thankfully, the drop was small and Gilbert was able to finish the stage despite a damaged knee. The Tour never lacks for mayhem, super tuck or no. This year more than a dozen cyclists have already withdrawn after sustaining everything from deep leg lacerations to broken collarbones and arms.

Still, most racers embrace the super tuck, rationalizing that to pedal professionally is to crash. Scientists are less certain about the cost/benefit analysis. Biking.com did a deep dive into this method and found much skepticism about claims of added speed. If the tuck accomplishes anything, it may be that the technique makes it more difficult for a trailing cyclist to ride in the draft of the scrunched-down leader. 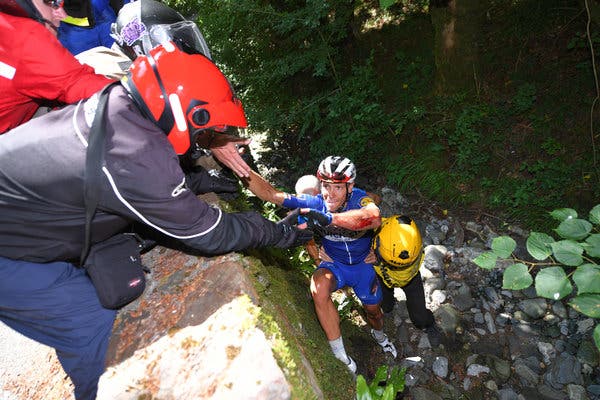 Philippe Gilbert traded safety for speed in last year’s Tour and lost: He fell over a stone wall and down a ledge | Tim de Waele/Getty Images

“It’s not so much you are going faster, it’s that others can’t follow,” Martin said. “So, yah, the science is a bit sketchy.”

It was the search for the super tuck and its cousin-in-pain, the many-thousands-of-feet ascent, that brought me to the Pyrenees. Not long after leaving Arreau, I thought I would catch the race to Tourmalet, which at 6,938 feet is the highest paved pass in the French Pyrenees. I expected to join the mountain goats and a few hundred hardy souls cheering on the boys.

Instead I found a mountain tailgate party that would put the Dallas Cowboys faithful to shame. Thousands upon thousands of fans had pitched tents by the side of the road or slept in cars and parked campers amid herds of cows. The morning of the race I awoke to the sight of portly gentlemen, young boys and mothers with infants in bike seats pedaling and walking up the steep hill.

Many had stuffed baguettes in backpacks; a few pulled coolers of beer. Along the Tourmalet ridge, thousands sat in a vertiginous and flowered meadow, as if in a natural IMAX theater. The flanks of the Pyrenees rose gray and jagged, and far below us the valley filled with clouds.

About 5 p.m., up came the cyclists, finishing the steepest part of their up-and-down assault on the Pyrenees, lightning-fast super tucks mixed with agonizing climbs.