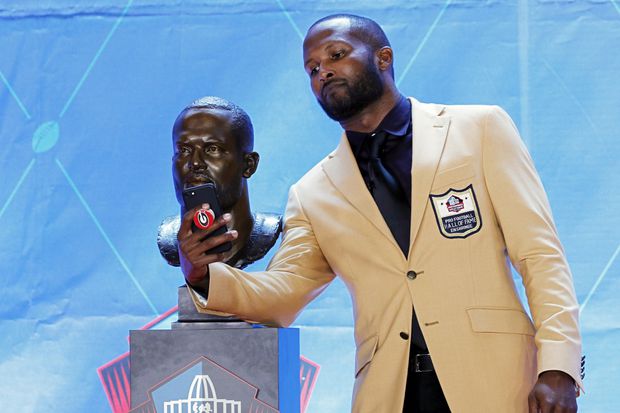 (August 4) – On Saturday, Champ Bailey, who was one of eight former players and league executives inducted into the Pro Football Hall of Fame this weekend, devoted part of his nationally televised speech to urge white Americans to pay attention to the injustices black Americans face.

Bailey’s speech came two days after another inductee, former safety Ed Reed, was spotted at the Hall of Fame game wearing a shirt with the faces of nine black Americans killed in recent years, including Michael Brown, Trayvon Martin and Eric Garner. During his induction speech, Reed mentioned Freddie Gray, the Baltimore man who died in police custody in 2015, by name.

Bailey’s speech was at least the fourth time in recent years that a Hall of Fame inductee or his family used the weekend to highlight a social-justice or player-health concern. Some of the messages have been subtle; Bailey’s words were the most direct appeal.

The NFL in February settled the collusion case brought by Colin Kaepernick, the former San Francisco 49ers quarterback, partly to try to put an end to the uncomfortable spectacle of players using the league’s vast platform to shine a light on their concerns about police brutality and social justice.

It is unclear how many players this season will continue kneeling during the playing of the national anthem, although Eric Reid, the Carolina Panthers safety who also accused the NFL owners of colluding to keep him off the field, said last week that he plans to continue protesting this season. But players continue to speak out, including at one of the league’s biggest events, the induction ceremony at the Pro Football Hall of Fame.

At last year’s Gold Jacket ceremony, Randy Moss, the former wide receiver who was a member of the class of inductees, wore a necktie with the names of 12 black men and women killed by the police. Moss told ESPN that he subsequently received hundreds of pieces of hate mail.

The stewards of the Pro Football Hall of Fame try hard to ensure the festivities remain a celebration of football and the NFL. In 2015, Sydney Seau, the daughter of Junior Seau, was prevented from introducing her late father at the induction ceremony.

In 2012, Seau killed himself and was later found to have chronic traumatic encephalopathy, the degenerative brain disease linked to repeated head hits and found in more than 100 former NFL players. His death and the disease have been a source of profound embarrassment to the league.

Sydney Seau insisted her speech only focused on her father’s life, not the details of his death. She was eventually allowed to be interviewed on the side of the stage.

In recent years, the NFL has tried to walk a fine line on social issues, trying to address players’ concerns at the same time it tries to keep politics away from the field as much as possible.

After fumbling for a way to stop players from kneeling during the national anthem, the league agreed to donate money to social-justice causes of the players’ choosing. The NFL also began allowing players to wear cleats customized with messages related to social causes, including the Black Lives Matter movement.