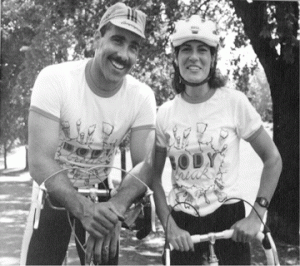 Hal Johnson and Joanne McLeod hosted Body Break for more than 30 years. Johnson says the TV segment was inspired by his experiences with racism | Body Break

Hal Johnson, who co-hosted Body Break — the long-running, informative TV segments promoting health and fitness — with his wife Joanne McLeod, says it was racism, and not fitness, that inspired the idea. Johnson shared a four-minute video on the background of Body Break, which started when Johnson was hired in June, 1988 to be a sports reporter for TSN, a division of Bell Media and partly owned by ABC/Disney. But that offer was recanted because executives at the sports network did not want two Black reporters.

TSN released an apology to Johnson as if it was a matter of the past:

“We apologize to Hal Johnson for the racism he experienced at TSN beginning in 1988, a shameful part of our past, and thank him for sharing his story as a reminder of the impact of racism in Canadian media that continues today. We recognize that even 30 years later, there is still much work to do to improve our commitment to on-air and editorial diversity.”

That rejection, along with other brushes with racism in the media business, inspired Johnson to create Body Break with his wife, Joanne McLeod.

In the video, Johnson says, “I thought: ‘How can I change things? How can I make [sure] that we can all live, work and play together and there won’t be this attitude: white and black and Asians, people with disabilities, male, female — that we can’t all be together?’”

Johnson and McLeod pitched Body Break to dozens of partners, but it was picked up by ParticipACTION, who ran it for 32 years.

“We’re happy to have hopefully given health and fitness tips to Canadians for 32 years, but also enlightened you that we all can live, work and play together, regardless of our ability, disability or skin colour.”

Read more about Johnson’s story and watch his video here.