Canada finally beat the US in soccer

Last night in Toronto, the Canadian men’s soccer team defeated the United States 2-0 in a CONCACAF Nations League match. This is the first time in 34 years that Canada beat the U.S. in men’s soccer. No one on the current team was even born the last time this happened. END_OF_DOCUMENT_TOKEN_TO_BE_REPLACED

Friendship first: Mexican and US soccer teams unite to stick it to Trump’s wall

The Mexican and U.S. national soccer teams defied protocol Friday night November 11 in their World Cup qualifier as they posed together for a team photograph in a display of unity as U.S. president-elect Donald Trump threatens to tear the two nations apart. END_OF_DOCUMENT_TOKEN_TO_BE_REPLACED

A bedraggled, sorry imitation of a national team 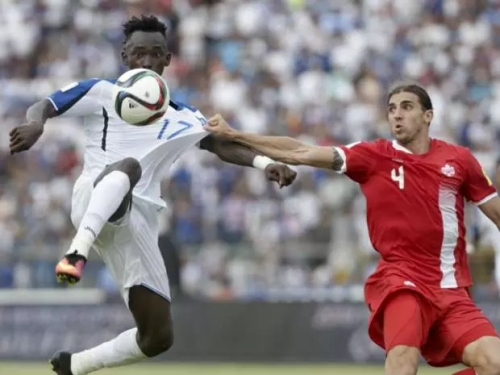 After some wonderful football (soccer) in the World Cup and the Olympics, it was painful to watch the Canadian men’s team play Honduras tonight in a qualifying match for the 2018 World Cup in Russia. The game was played in San Pedro Sula before 40,000 people, and it is extraordinary that they have not won a single match in Honduras since 1985 – 35 years – and are not likely to win another for the next 35 years. END_OF_DOCUMENT_TOKEN_TO_BE_REPLACED

Though Cuba’s debut in Gold Cup stained with irregularities, it fights through to the quarter-finals

The USA and Cuba may have agreed to normalizing diplomatic relations, but that has not extended to sport due to the hostile attitude of the Obama administration. News agencies report that the United States refused to allow the coach of the Cuban national football team, six players and the team’s doctor for the CONCAF Gold Cup, a regional tournament of the Confederation of North, Central America and Caribbean Association Football, hosted under FIFA auspices, currently underway in that country. What it shows is that even the domain of sports is being brought under the liquidationist pressure, whereby the modern norms of a level playing field and sportsmanship in competition are being destroyed in order to achieve self-serving political aims.
END_OF_DOCUMENT_TOKEN_TO_BE_REPLACED

There is no question that there is a lot of corruption inside the Fédération Internationale de Football Association (FIFA). Bribes and behind the scene deals have been going on for decades. The sport federation is responsible for the most watched and popular sport in the world and is part of a lucrative business venture that has a lot of soft power and prestige attached to it. MAHDI DARIUS NAZEMROAYA* END_OF_DOCUMENT_TOKEN_TO_BE_REPLACED

The FIFA war is not about football or corruption

Why are the Americans so interested in “cleaning up” a game that has been managed mostly by Europeans so far? Why did Swiss cops come with New York Times journalists in tow? Why did they arrest officials exclusively from South and Central American federations? The FBI’s move against seven FIFA officials on charges of corruption is seen by most countries as a desperate US-Euro effort to isolate Russia and re-open the bids for the 2018 and 2022 World Cups. SHOBHAN SAXENA* 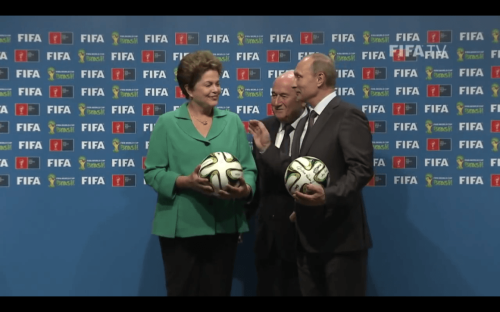 From Brazil to Russia: symbolic hand-over at the Maracana, Rio de Janeiro, 13 July 2014. Sepp Blatter, president of FIFA, stands between Russian president Vladimir Putin and Brazilian president Dilma Rousseff in this grab from the official FIFA video of the event. Russia will host the 2018 Fifa World Cup.

Rio de Janeiro (May 31) – Forget the analogies about football being more important than life and religion. The Beautiful Game has always been all about politics among nations – on and off the pitch. And now, it’s reaching Cold War levels. END_OF_DOCUMENT_TOKEN_TO_BE_REPLACED

Owen Gibson (Nov. 5) – Claims that a disgraced former Fifa executive turned FBI informant used a bugging device to record meetings with colleagues at the London 2012 Olympics have led to calls for the Serious Fraud Office to investigate world football’s governing body. The allegations, part of an investigation into Chuck Blazer by the New York Daily News, prompted the Conservative MP Damian Collins to renew his call for the SFO to investigate long-standing bribery and money-laundering allegations surrounding Fifa.

END_OF_DOCUMENT_TOKEN_TO_BE_REPLACED 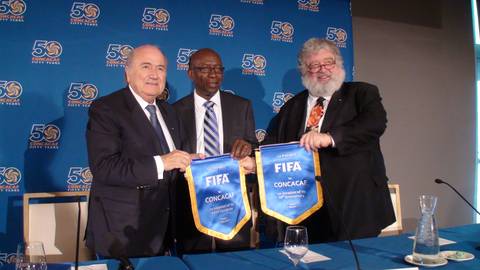 (22 April 2013) – A REPORT released during the CONCACAF congress in Panama on April 19 outlines harsh allegations of fund embezzlement committed by then FIFA vice-president Jack Warner of Trinidad and former CONCACAF general secretary Chuck Blazer of the USA. Both men had functioned without a written contract from 1998 until their respective departures, and the American Blazer allegedly received 15 million dollars in commissions for his services during that time frame.  END_OF_DOCUMENT_TOKEN_TO_BE_REPLACED

October 24, 2012 (REUTERS) – THREE Guatemala players have been banned for life by FIFA for their involvement in match-fixing in national team and club games, soccer’s world governing body said on Wednesday. END_OF_DOCUMENT_TOKEN_TO_BE_REPLACED