MLS and its money-grubbing Canadian franchises 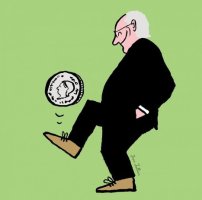 You really have to wonder about MLS and its leadership more and more every day, don’t you?

Having two weeks off between the conference semifinals and finals for an international break is just bad planning but at some level it was something they had no say in.

But the money-grubbing decision to shift Game 1 of the Toronto-Montreal series from Stade Saputo to the Big Owe in Montreal not only shows a callous disregard for the players and fans, it’s just a blatant attempt to stuff the pockets of the owners and league. END_OF_DOCUMENT_TOKEN_TO_BE_REPLACED

The “Red Devils” bedevilled the devil. The country that hosts the NATO headquarters – at a time of economic hardship, NATO is constructing a huge new $1 billion headquarters in Brussels. The eight-floor structure contains enough blast-proof glass to cover 10 football fields – ousted the military bloc’s supreme commander in a World Cup match played in Salvador, Brazil on July 1st. The significance of the match was as much off the pitch, as on.

The thinly disguised shock and disappointment of the TV broadcasters and sports media, which clearly wanted the United States to go through to the final rounds for commercial and political reasons, at the victory and the disparity in play was all too apparent. END_OF_DOCUMENT_TOKEN_TO_BE_REPLACED