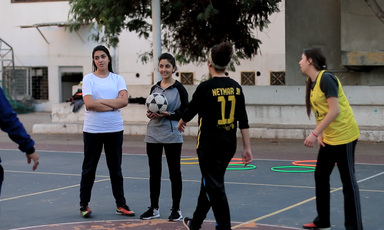 This football club in Gaza City is comprised of all young women.

“There was a group of young women who were talented football players and showed good sportsmanship, so we formed a team,” says coach Emad al-Ashi. END_OF_DOCUMENT_TOKEN_TO_BE_REPLACED

It’s been barely noticed, but this past week saw an incursion of politics into sports like no other. With little reason, the Israeli government made the decision to cancel the Palestinian national football club championship, otherwise known as the FIFA Palestine Cup. The contest between Gaza’s Khadamat Rafah club and Nablus’s FC Balata, located in the central West Bank, had to be called off when Israel denied travel permits to the Gaza team. The trip would have been just a couple of miles. END_OF_DOCUMENT_TOKEN_TO_BE_REPLACED

END_OF_DOCUMENT_TOKEN_TO_BE_REPLACED

Did Cristiano Ronaldo really donate €1.5 million to Palestinians for Ramadan? The short answer: no. The long answer, however, is more interesting. END_OF_DOCUMENT_TOKEN_TO_BE_REPLACED

END_OF_DOCUMENT_TOKEN_TO_BE_REPLACED

England humiliated “little Panama” 6-1 on Sunday in Nizhny Novgorod. One newspaper (the Herald Sun) called its team a “fraud.” The TV broadcasters and the four members of the TSN “World Cup Panel” – all British, two from Yorkshire – oohed and awed over the superior English performance. The London Guardian unashamedly rejoiced: “Panama hammered by England in World Cup walkover.” The Independent screamed that the great power “can go all the way” and win the World Cup. A Guardian photo spread selectively featured four shots of Panama players “manhandling” and “bear hugging” the innocent and virtuous Englishmen, the so-called inventors of the game. This from a country where UK Sport was forced to conduct in 2017 a “root and branch review” of its policies following reports of a culture of fear in organisations as diverse as British Cycling, British Swimming, British Bobsleigh and British Gymnastics. This hubris and the whole concept of “hammering” and a “rout” by a great power over a small nation completely negates the modern spirit of friendship, respect and appreciation of all peoples and their right to be. It is British über alles of the imperialist era. END_OF_DOCUMENT_TOKEN_TO_BE_REPLACED

Friendship first: What Celtic FC’s solidarity with Palestine can teach the world

As the 2018 World Cup frenzy starts to take over the news cycle, it is essential that we highlight examples of how the sport has brought people together, such as is the case of Celtic FC and Palestine. Celtic Football Club, a football club based in Glasgow, Scotland, has consistently shown solidarity with the Palestinian struggle.

END_OF_DOCUMENT_TOKEN_TO_BE_REPLACED

The beautiful game: a history of whitewashing international crimes

(June 8) – In the summer of 1978, at the height of Argentina’s brutal right-wing dictatorship, the 11th FIFA World Cup took place amidst an outcry over granting legitimacy to a state that is now known to have been responsible for the disappearances of around 30,000 people. END_OF_DOCUMENT_TOKEN_TO_BE_REPLACED 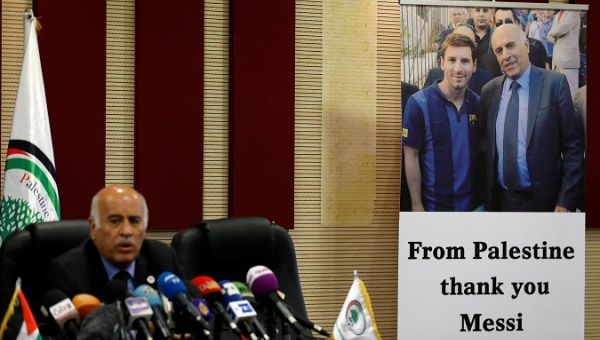 END_OF_DOCUMENT_TOKEN_TO_BE_REPLACED

Palestinians are celebrating the news that Argentina – and its star Lionel Messi – will not be playing the “friendly” football match that had been set for Jerusalem next weekend. END_OF_DOCUMENT_TOKEN_TO_BE_REPLACED