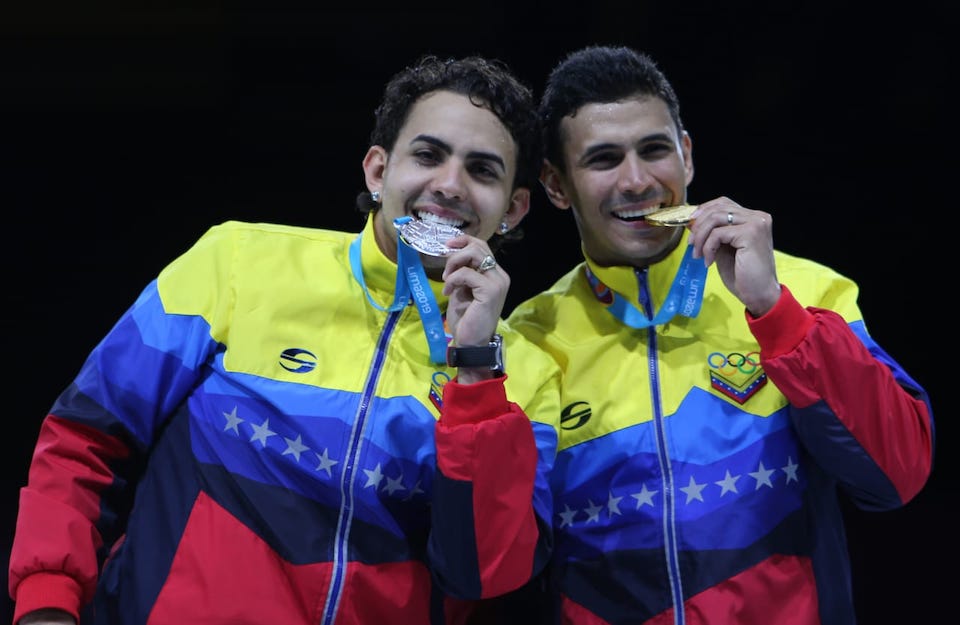 (August 7) – Ruben and Jesus Limardo battled for the gold medal in the Men’s Individual Epee fencing competition at Lima 2019, becoming the first brothers to compete in the final in the history of the Pan American Games. END_OF_DOCUMENT_TOKEN_TO_BE_REPLACED

(June 9) – The Venezuelan national football team stunned their United States counterpart on Sunday with a confidence-boosting victory of 3-0 in a friendly match in Cincinnati, as part of preparatory games for Copa America 2019. END_OF_DOCUMENT_TOKEN_TO_BE_REPLACED

CARACAS (Canadian Press) – Canada suffered a setback in its bid to qualify for the 2019 FIBA Basketball World Cup after dropping an 84-76 decision to Venezuela on Friday.

Venezuela (8-1) took sole possession of qualifying Group F with the win. Canada fell to second place at 7-1, but still looks like a strong contender to advance with two of its final three qualifying games at home. END_OF_DOCUMENT_TOKEN_TO_BE_REPLACED

Recreation in the Venezuelan barrio: The true freedom of free time

With the solidarity support of Cubans, sports and recreation are continuing to transcend marginality and exclusion in Venezuela’s poor communities. Dilbert Reyes Rodríguez

CARACAS (August 4) — Madelaine Acosta is in Venezuela again. “This is nothing like 2004. It’s something else, and it’s all about what we have achieved.”

She arrived here from Jagüey Grande, in Matanzas, as part of the first group of collaborators assigned to work in the country’s poorest areas, to improve the lives of inhabitants dominated by marginality and all its associated problems. Those were the first days of the social mission Barrio Adentro Deportivo, (Into the Neighbourhood with Sports) and she, like all the other original members, started from zero.  END_OF_DOCUMENT_TOKEN_TO_BE_REPLACED

A few days ago I came across the following report of a June 23rd message from Fidel Castro to Diego Maradona, also reported in The Independent and the Guardian. Kelly’s report was dated June 27, 2014. Coincidence? Hidden political agenda? Judge for yourself. – Tony Seed END_OF_DOCUMENT_TOKEN_TO_BE_REPLACED

The moral importance of the World Baseball Classic

IN THE early days of the Revolution, the Olympics were an event for amateurs.

When the concepts of developed capitalism managed to infiltrate the Olympics, sports stopped being a health and education issue, which had been its main goals throughout history.

The only country in the world where that character prevailed was Cuba, which for many years won the highest number of gold medals per inhabitant. END_OF_DOCUMENT_TOKEN_TO_BE_REPLACED