IOC knew Russian athletes were clean, but concealed evidence of their innocence – lawyer

Staff of the International Olympic Committee (IOC) dismantle a backdrop after a news conference after the Olympic Summit on doping in Lausanne, Switzerland, June 21, 2016 | Reuters / Denis Balibouse

Russian sport has won a crucial legal battle on Saturday January 19. The Swiss Supreme Court has turned down the IOC’s appeal against the Court of Arbitration for Sport (CAS) ruling from February 1, 2017 to acquit 28 Team Russia members of doping use accusations during the 2014 Winter Games in Russia. The Olympic officials accepted the decision with “disappointment,”but announced that they’ll stop further persecution of the athletes.

The athletes’ good names might be restored now, but they had all been handed lengthy disqualifications and missed out on the Winter Olympics in Pyeongchang last year.

The harsh measures were introduced after an Olympic disciplinary panel accused the Russians of being part of a state-run doping program, based on claims by former Moscow anti-doping laboratory director Grigory Rodchenkov, who fled to the US in 2015 and is wanted at home on several charges.

German legal firm Wieschemann Lawyers said in a statement on Saturday that “there is no factual evidence for the allegations made by Dr. Rodchenkov regarding the events in Sochi.” It also insisted that the International Olympic committee “seriously violated the procedural rights of the athletes and even withheld exculpatory evidence from the defense and the court.”

“We could win the panel that in some very important details Dr. Rodchenkov lied in the procedure as a witness,” Christof Wieschemann, the lawyer for Russian cross country skier Alexander Legkov, whom the IOC tried to deprive of his gold and silver Olympic medals, told RT.

Wieschemann said that since January 2017 he has filed “no fewer than five written requests” to IOC for evidence against his client, but was never shown any.

He insisted that he has “confirmation” that the Olympic officials re-tested the samples of the accused Russian athletes in late 2016 and that they all returned “negative results.”

The lawyer also said that the chain of custody, which traces the doping test’s route from athlete to the laboratory and beyond, contradicted Rodchenkov’s claims.

The IOC’s key witness said that he swapped the samples of the Russian athletes under the cover of night. However, “in the chain of custody we can see very clearly that more than half of the samples with reported marks and scratches arrived at the laboratory during the daytime and were processed within a very short period – about 60 or 90 minutes. So, it would’ve been absolutely impossible to tamper with them as Dr. Rodchenkov told us,” Weischemann pointed out.

The IOC was well aware of those facts, but maintained a very different stance publicly, including at last year’s hearings at the CAS, the lawyer said.

“If WADA [World Anti-Doping Agency] and IOC had disclosed these facts, which were in their possession in the beginning of the procedure [against the Russians], it would’ve been very evident since… December 2016 that most of the athletes mentioned in [Rodchenkov’s] list are innocent,” Wieschemann explained.

But instead the Olympic officials kept insisting that “the blood samples weren’t tested” and that the chain of custody for the Russian doping tests “is not known,” he added.

After being unable to compete for two years, Legkov decided to retire from sports in April last year in order to concentrate on his projects outside the track, including being a lawmaker in the Moscow Region. He now only takes part in amateur skiing competitions. It’s unclear if the 35-year-old is going to sue the IOC over false accusations against him.

ALSO ON RT.COM ‘Rodchenkov Act’: US vies to become anti-doping policeman of the world after criminalizing it 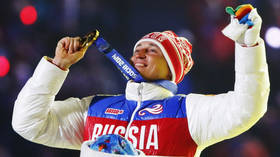