The world’s oldest baseball park is in Canada 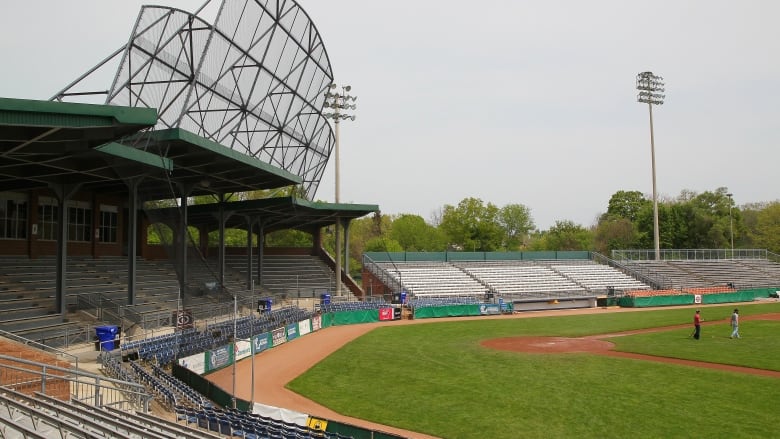 London, Ont.’s Labatt Memorial Park has been around since 1877, and the Guiness Book of World Records recognizes the charming 5,200-seat stadium as the world’s longest continuously operating baseball grounds.

The streak looked like it might end at 143 years with the pandemic causing the cancellation of baseball seasons throughout Ontario, but a special exhibition game of Memorial Park’s main team, the London Majors, was organized to keep it intact.

The Majors Intercounty Baseball League (IBL) season remains cancelled due to the pandemic, but the Majors will take the field on Friday night to play the Guelph Royals in a matchup of IBL foes. Fans won’t be allowed in, but the game will be shown on local cable TV and on the Majors’ YouTube channel.

Read more about the effort to preserve the streak here.

Exactly how bad is the new Calgary Flames arena deal? Neil deMause writes in the Field of Schemes website:

(July 26) – With all of four days of public comment period (expiring today at noon, July 26) allowed before the Calgary city council votes next week on its Flames arena plan, the media have been commenting like crazy on how it’s either terrific or godawful. Among the takes:

THE International Olympic Committee (IOC) is not removed from the fluctuations in the global economy, experiencing its recessions and slowdowns, elements that affect the host cities of its quadrennial Games. END_OF_DOCUMENT_TOKEN_TO_BE_REPLACED

After a closed meeting behind the backs of the people on July 22, the Calgary city council announced an outrageous pay-the-rich deal with the owners of the Calgary Flames of the NHL for a new 19,000-seat arena. It will be built on current Calgary Stampede parking lots to replace the Saddledome. Details include: END_OF_DOCUMENT_TOKEN_TO_BE_REPLACED

“It’s time we gave prestige and standing back to the Olympic Park and the Olympic Stadium,” [Québec Tourism Minister Caroline] Proulx told reporters at a news conference. “For too long it has been not loved or under-loved by Quebecers.”…

“We will be working on replacing the roof, it is mandatory to change the roof,” Proulx said. “We will change the roof. The business plan will be tabled in the next few months.”

This is not the first we’ve heard of Montreal’s Olympic Stadium getting a new roof — a year and a half ago, the previous tourism minister floated spending about $250 million on one, which at the time I called “just madness.” There are certainly times when stadiums need repairs — for Olympic Stadium, this has historically been “pretty much always” — but spending $250 million on a new roof, retractable or otherwise, is a hella expensive way to provide “standing and prestige,” especially when past roofs have only resulted in scandal and ridicule. MORE

Tagged as Quebec, Stadiums and arenas

Moncton’s bid to host the Francophone Games is a disaster

Large sporting events — the Olympics, Commonwealth Games, Pan American Games, what have you — as a rule are economic disasters and black hole budget items for governments. That’s because backers always oversell their ability to control costs and overestimate the economic impact of such games. END_OF_DOCUMENT_TOKEN_TO_BE_REPLACED

(CNN) – See if you can wrap your mind around this eye-popping price tag for a renovated college football stadium in Texas: half a billion dollars. END_OF_DOCUMENT_TOKEN_TO_BE_REPLACED

MLS and its money-grubbing Canadian franchises

You really have to wonder about MLS and its leadership more and more every day, don’t you?

Having two weeks off between the conference semifinals and finals for an international break is just bad planning but at some level it was something they had no say in.

But the money-grubbing decision to shift Game 1 of the Toronto-Montreal series from Stade Saputo to the Big Owe in Montreal not only shows a callous disregard for the players and fans, it’s just a blatant attempt to stuff the pockets of the owners and league. END_OF_DOCUMENT_TOKEN_TO_BE_REPLACED

What is wrong with this twitter? First, there’s no people in the photo. ESPN could be saying that nobody is outside because they’re all watching the game between Cuba’s national team and the Tampa Bay Rays where the tickets were free, compared to the megabucks one has to pay in the US or the Rogers Centre. In other words, this was such an interesting game that nothing else much is going on. But then the photo – like all the hyperbole that Cuba’s sports infrastructure is “crumbling” – blew up in EPSN’s face, as MATT NOVAK documents.