Vasek Pospisil: Tennis needs change if it wants to restore fairness and transparency 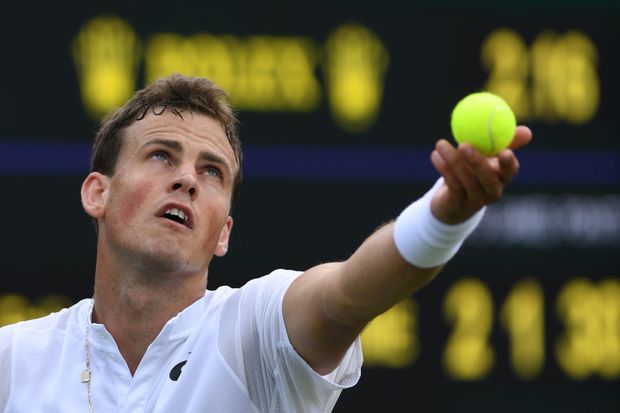 The players are given the bare minimum of what the governing bodies feel will avoid a revolution or an extremely angry group of players, says Canada’s Vasek Pospisil | GLYN KIRK/AFP/GETTY IMAGES

It is a long, difficult trip to the top tier of pro tennis. It requires years of sacrifices from family, a dedication to the sport from an early age and it’s incredibly costly. And yet when players reach the top level, they are still denied some of the perks and advantages that should be incumbent upon reaching that plateau. Changes – specifically a greater share of revenue and a union to advocate for the players’ interest – are needed to restore fairness and transparency.

I was five years old when I started playing, an age that’s about average for the current top 100 players. In my case, my dedication to the sport was made possible by my parents, who escaped the communist regime in the Czech Republic and immigrated to Canada with no money in their pockets. I was born shortly after. My father became an avid tennis fan and started coaching me from magazines and videotapes. When I was 12, I started home-schooling. This meant more time on court while also having the flexibility to travel to competitions. When I was 14, my father sold our house in the small hockey town I grew up in, and our whole family of five plus two dogs lived in a one-bedroom apartment in the city so I could pursue my dreams in a more tennis-friendly environment. My father also quit his job so he could travel with me full-time, on a shoestring budget, to tournaments and competitions around North America and Europe. We mostly drove across the continents from tournament to tournament, sleeping in cheap motels, friends’ houses and, occasionally, rest areas.

Without major sacrifices from my family, it would have been nearly impossible for me to “make it” in the sport.

When I finally reached the Grand Slam and Masters level, it was like a dream come true. All the hard work and sacrifices became worth it and there was finally some return on investments. After my first successful year on the ATP Tour, I gave back to my parents for everything they did for me. I was thrilled to have made it and thought, “Here I am. I’ve finally arrived to this perfect world of top-level tennis.” There were perks, nice hotels (finally!), chauffeurs to the courts, free food. What a huge change from staying in the ghettos of Mexico City with gunshots in the back alleys, or when I played in Nicaragua in the middle of riots. Top-tier pro tennis was much more glamorous.

However, as the honeymoon phase of reaching the pinnacle of the sport started to wear off, I began to hear from the older, more experienced players on the tour about the greed, power and total control that the major tournaments have over players. I started to look at things differently, and began noticing the business meetings and whispers of huge deals made behind the scenes.

I decided to run for the 10-member ATP Tour’s Player Council and a year ago, got elected. I couldn’t believe the things I was hearing and was outraged by the realities of the Tour. I wanted to try to effect change. I was angered by the lack of substance and information at the ATP’s Player Council meetings, where all the top players of the tour are present. I wanted to do something, but mainly, I wanted to know more.

I wanted to know why Grand Slam events only give 14 per cent (7 per cent to the men, 7 per cent to the women) of the revenue back to the athletes when most other professional sports of comparable size are near or above the 50-per-cent mark. Tennis has the lowest revenue sharing of all professional sports that have become a global business. Even the 14 per cent is not an audited figure. This number could, potentially, be quite a bit less.

This low revenue share, in turn, means only a handful of tennis players can make a good living in a sport that makes billions of dollars and in which athletes have perhaps the highest out-of-pocket expenses compared with other sports.

Now, I know what some of you might be thinking. “Here we go, another rich professional athlete asking for more money.” But hear me out.

While it is true that the top 50 players in the world make a great living – I make a healthy living, for which I’m grateful – the realities are that, outside of the top 100 players, when you add up the personal and staff expenses for a 30- to 35-week travel calendar, most players are either losing money or breaking even.

By way of comparison, in 2018, the men’s singles players that finished the year ranked 51 to 100 made an average of US$583,235 (before taxes and heavy expenses). In the NHL last season, there were more than 450 players who made more than US$1-million. The revenue share in the NHL is 50 per cent. Plus their expenses are covered.

The tennis money is there, the players deserve it, but they’re not getting it. One reason is the governance structure of the ATP. The ATP Tour board – the governing body of the men’s pro-tennis tours, with the exception of the four Grand Slam tournaments – has three player representatives and three tournament reps. Since all major issues that get voted on end in a 3-3 tie, nothing changes and the tournaments continue calling all the shots because, well, they’re “running” the show. It’s quite a bit more complex as you can imagine and, unfortunately, I don’t have the word count to get into all the details.

The governance structure is a very effective tool for tournaments to maintain their monopoly and complete control of the ATP, with the players having nearly no power to change matters that affect their livelihoods.

No other professional sport or organization is structured in such a chaotic way. It ultimately leaves the players powerless. So why don’t the tennis players form a union, similar to what other major sports have?

If only it were that simple. But it’s important to know that the major governing bodies of tennis are completely against any player movement to unify.

One of the arguments and threats used against us by the ATP – our own organization – to stall any momentum of forming a union, is that we are independent contractors and cannot legally unify without the threat of getting sued. (What a great look that would be, if the major tennis events sued the athletes because they wanted a stronger voice). Technically, it is true we could get sued if we actually were independent contractors. But are we really? According to the bylaws of the ATP we are, but this would depend on how a judge would view the case in the court of law. Would tennis players really be able to make a comparable living outside of the ATP? Or are we dependent contractors whose livelihoods depend on the ATP and Grand Slam events? I am much more inclined to choose the latter. There are no competing tennis tours. It’s a no-brainer. Plus, we have obligations to the ATP and get penalized by the organization for not playing the big events. So, I’m willing to bet that a judge would take the players’ side and blow that argument to bits. At which point a union can be formed and a step toward justice and fair treatment can be made.

It’s natural for players to think they are getting mistreated when we are denied the ability to see the financials of the events we play in, and when we’re not given details of deals made behind the scenes. In one major deal, the players were intentionally left in the dark and our board representatives were asked to keep it that way.

A players’ union would help balance the scales by giving the players a more effective voice, a legal voice, in negotiations about revenue sharing for tournaments and for the Grand Slams.

We’re constantly told that we must “trust” the tournaments and that this is a “partnership.” Except this is business. The players are given the bare minimum of what the governing bodies feel will avoid a revolution or an extremely angry group of players. The goal for the ATP, in order to avoid unrest in its otherwise well-run and controlled empire, is to give the players only what they need. Still, there is a history of player unrest on the Tour. In 2012, almost all the players (except one in a very high-profile position) wanted to boycott the Australian Open. Because of this pressure, there were prize-money increases from the Grand Slams in recent years. (The revenue share has barely gone up, though, if at all, because the Grand Slams have been making more money every year, as well).

What I wish for, and what I am working for, is for there to be a balance of power on both sides so that true negotiating can happen. I would like both the players and the tournaments to come to the table, make their arguments and come to compromises they can mutually benefit from. What I’m advocating for is fairness and transparency, nothing more.

*Vasek Pospisil, 29, of Vancouver, has been a member of the ATP Players Council since 2018. He has spent the past seven months recovering from back surgery, which has dropped his world ranking to 207.

Originally published in The Globe and Mail, August 2, 2019

Tagged as Athletes who take a stand, Exploitation, Tennis